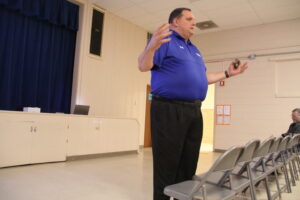 Superintendent Mike Lamb and the Sulphur Springs ISD school board held a public town hall meeting Thursday night at Travis elementary to discuss the $93 million proposed bond set to be voted on at the election on May 7th. Approximately 35 to 40 citizens attended the presentation.

Lamb began his discussion of bond with some coverage of previous bonds and how those were used. He also touched on the amount of the bonds to start to build and understanding the school finance process.

Lamb also discussed how it is a challenge to make updates to older buildings, such as not having interior access to walls to add in electrical for new technology to use in the classroom.

For example, at Travis Primary, all new electrical has to be added on the outside of walls. Campus ceiling tiles cannot be purchased anymore and have to be painted and put back up.

From there, Lamb went on to talk about the long-term plan for buildings. He detailed:

Step one: new bonds to help with buildings that are going to age out. In the placement of this bond the board is trying to build bond capacity for buildings in the future, to allow for continued growth within the school district.

The school board initially proposed a $130 million bond proposal to a community committee, who negotiated that amount down to the $93 million bond. This $93 million sum is on the ballot for May.

Lamb went on to explain the basics of school funding. There are two budgets that a school district operates: maintenance and operations, which funds the day-to-day funding such as salary, supplies and repairs. The other part of the budget, interest and sinking, is the money that pays debt. 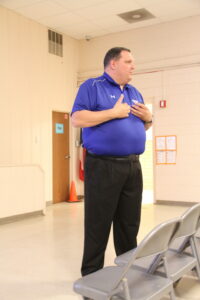 Two tax rates build the ISD rate. The last three years, rates overall have decreased.he state sets the amount, and only sends the difference, to the school districts. There is also an appraisal gap in funding, Lamb said. The amount that the State sends is based on attendance not enrollment, the district strives for a 96% attendance rate.

According to Lamb, there has been a decrease from $1.4 to $.87 for the ISD from the state. In the proposed bond, the increase would be drawn to the interest and sinking budget, the money that pays the debt. The new bond would raise the overall tax rate to $.395/$1.

At the same time as the school bond vote, the State of Texas is sending to vote an increase in the Homestead exemption, which could potentially decrease a homeowner’s tax liability if that passes the State. It was also discussed that if your home value changes, by way of increasing and the rate stays the same your taxes would go up, since the value of your home increased.

Bond funds will be used for the following: 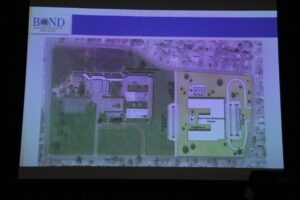 What would you do with the current Travis building? Central office, special Ed, maintenance, transportation. The most likely change would be for it to become the new Austin location. Austin is in need of more classrooms, they would tear down oldest part of Travis and move over. They could tear it down and rebuild a new campus. No final decision has been made.

How much have they bid out for cost estimates? How soon can they start construction? There is no way to tell how much the final cost will be. It will depend on many contributing factors. Immediately, is when work can begin.

What kind of excess is set aside for overage for materials? There is no fluff. It will be tight to make it all happen.

What is the interest rate on bonds? They won’t try to set those amounts until the bond has passed.

How are they deciding which projects to complete? They are taking to the staff and trying to make plans.

What are contingency plans if it can’t get done with increased prices or higher interest rates? They look at costs and budgets weekly. They do have some contingency built in but no one knows what the costs will ultimately be. The school tries to take the most conservative approach they can, and track costs as they design.

If the bond does not pass, how will we be able to keep up with new students coming in? If we grow, there is money that comes with it but it’s still not enough to cover these changes. That will have to be addressed if that comes to pass.

Would another bond be proposed sooner than 5-10 years from now? Yes, we would go for a different bond and work towards a solution.

Lack of sidewalks: could they be improved? Yes, they will be improved in the plan for areas that will be changing.

For the new growth, has the city looked into anything like having the developer put in an elementary school? That doesn’t work as well as you think it does. The developer will provide the land, but not build the school.

For those that want to hear this presentation in person, Lamb urged citizens to reach out to the school district as he is “willing go anywhere to share the information.”

Lamb also noted that any pictures citizens may have seen are just ideas, and the end result might not look like that. Final decisions will be made once the bond is approved.

For more information regarding the bond, visit sulphurspringsisdbond.com

No. 9 ranked Lady Cats set to take on Hallsville