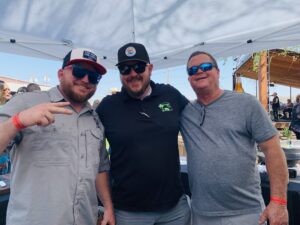 Slaughter’s BBQ, a Texas Monthly Top 100 BBQ joint, competed in the River Ranch Stockyards Cowtown Burger Showdown this weekend in Forth Worth, for the title of “Best Burger In North Texas”. The competition was fierce, with some of the best burger slingers in the area all trying to prove they are in the best in North Texas.

The competition was broken down into multiple rounds, with contestants needing to finish well in each round to advance to the next one. After three intense elimination rounds, Slaughter’s BBQ finished second overall in the event, proving themselves as one of the very best in the area. 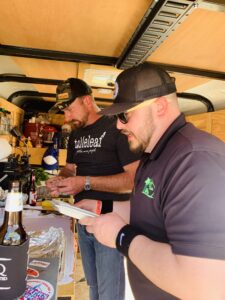 Slaughter’s was joined by Logan Vaughan of Tableleaf Supper Club and Brandon Williams of Weber Ninja. “Thank you to everyone involved who made this possible today,”David Slaughter said via Facebook. “Everyone pulled their own weight and worked their tails off.”

The event was judged by some big names, making the event that much more exciting for both the competitors and people attending the event. The judges included Food Network’s Ali Khan, as well as Chef John Tesar and Trey Chapman.

Slaughter’s finished second, only behind Dayne’s Craft Barbecue, out of Forth Worth. Slaughter’s is located on 1000 Gilmer Street in front of the Fix & Feed Hardware. Their hours of operation are from 10 a.m. to 2 p.m. on Wednesday-Saturday. For more information visit them at  www.slaughtersbbqoasis.com