Interstate-30 near Brashear closed after crash 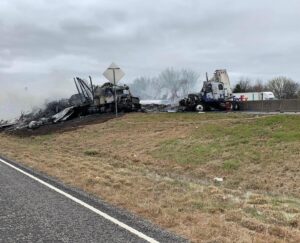 Collision on I-30 westbound/ HCSO

A collision on Interstate-30 near the Brashear exit in Hopkins County closed the road down for several hours on March 22.

At approximately  1:42 p.m. on Tuesday, Hopkins County Sheriff reported that I-30 Westbound near Brashear was shut down due to a collision.

At least two tractor-trailers were involved, and Hopkins County fire rescue was on-scene to deal with a blaze, witness reports show.

HCSO reported that injuries sustained by involved parties are believed to be non life threatening. One patient was flown by medical helicopter to an undisclosed hospital, HCSO stated.

Citizens reported that traffic persisted until past 5 p.m.

No additional information is available at this time.