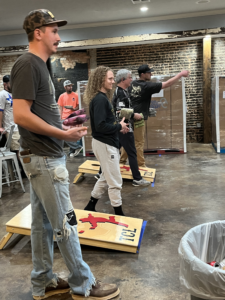 UPDATE: Everyone had a blast at Adult Leadership’s cornhole fundraiser for Kids Kingdom and raised approximately $4,000 for our beloved playground’s rehabilitation!

Leadership will continue to fundraise until the weekend of April 22-24, when they will re-stain wood, replace mulch, and repair damage.

If you consider yourself a cornhole pro or simply like to toss some bags in the backyard occasionally, then the Sulphur Springs Leadership Class’ cornhole tournament is for you.

Even if you don’t play cornhole, the Saturday, March 26, event will include a silent auction with dozens of great items.

The best thing is that 100 percent of the money raised will be used by the 2022 Leadership Class to restore Kids Kingdom.

The cornhole tournament will have two divisions: open (for advanced players) and social. The cost is only $50 per team, and prize money will exceed $1,000.

Two-person teams can register in advance on the Hopkins County Chamber of Commerce website or registration can be done the day of the event, beginning at 11 a.m. at Backstory Brewery. The brackets will be double elimination and teams will begin play at noon.

The silent auction will run from 11 a.m. to 3 p.m. Silent auction items include Courthouse balcony seating for the Independence Day concert, a ride for up to four kids on the Hopkins County firetruck, a morning tee time for the Chamber golf tournament, hundreds of dollars on gift cards and gift baskets.

The tournament will also have a free jump house for kids.

Money from the event will be used to pay for powerwashing, restaining, repainting, replacing some wood, replacing playground equipment including a handicap swing, tire swing and two slides, new dirt and mulch and installing new lighting.