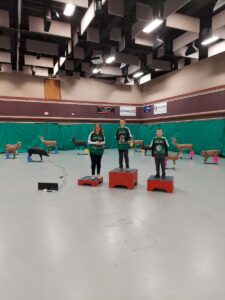 Hopkins County 4-H Archery Team had two of 12 members at the ASA Southwestern Indoor Archery tournament on Friday, January 28, 2022 . Both did very well at their 1st indoor 3D targets tournament, with farthest distance was 30 yards for their age groups.

Coach Stephanie Stewart is very proud of the boys taking on the challenge of a new type of tournament of indoor and being very successful at it.