January 13, 2022
Totally tubular! In honor of this year’s Chamber Banquet theme, Hopkins County Chamber of Commerce is hosting a trivia contest about all things ’80s.
Answer questions about 1980s music, television and pop culture every week day leading up to the 95th annual Chamber Banquet on February 17 and you could win some rad prizes.
Prizes are awarded to the top scorer each week, with a grand prize at the end! To purchase a ticket or table visit: https://business.hopkinschamber.org/events/details/95th-annual-membership-banquet-2711?fbclid=IwAR0xktrOPXZG-xNFaK54MYp6KTFiKDIi6uWhU-Q1MyGRUD3qnBkeXcP-62Y
Or call 903-885-6515. It’s gonna be gnarly! 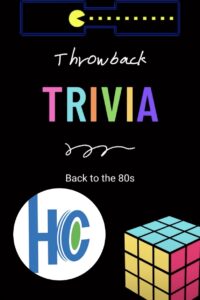 January 13
1. What was the highest grossing film of the 80s decade?

3. In Back to the Future, Doc makes a time machine out of what kind of car?

4. CD players were first introduced in 1982… what does CD actually stand for?