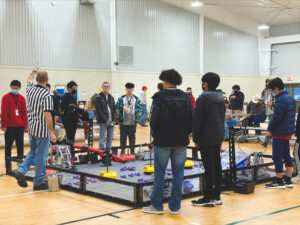 Miller Grove ISD has been busy using their new multipurpose building– among other things, to host robotics tournaments.

This Saturday marked the fourth such tournament Miller Grove has hosted. Their team, the Gear Grinders, competes in VEX league robotics and is composed of both high schoolers and junior high schoolers. The VEX season runs throughout the regular school year; competitions begin in October and finish up at the end of February.

Miller Grove has four more VEX competitions left this year before the possibility of advancing to a higher level. Three of those events will be hosted at Miller Grove.

The state competition for VEX is in March and the World Competition is in May. This year’s World Competition will be May third through twelfth in Dallas. The season hasn’t progressed enough to know how high the team will go, but last year the Miller Grove students made it to the world competition under coaches Davy Moseley, Laura Smith and Robert Smith. 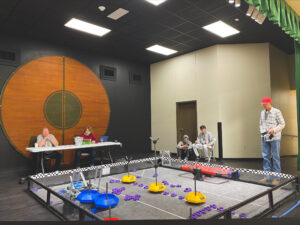