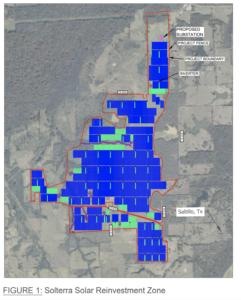 After an invocation by fire marshal Andy Endsley, the court convened at 9:00 a.m.

The court then discussed establishing a reinvestment zone in the Saltillo community between Hopkins County and solar energy company BT Solterra.

Newsom opened the floor for citizen comment regarding a BT Solterra reinvestment zone at 9:08 a.m.

Although BT Solterra previously received a reinvestment zone authorization from the court on November 22, 2021, Belltown Power’s Austin Willis explained they found themselves back in court due to “an issue with the newspaper posting.”

In the state of Texas, a proposed reinvestment zone, such as BT Solterra is seeking, must be published in writing in an area newspaper with good circulation within seven days before it is voted on, according to the Texas comptroller’s office.

Per the comptroller’s office, this means the notice would have needed to be published November 15, whereas the Sulphur Springs News-Telegram reported to Front Porch News the notice was published on December 1.

“It was just an oversight by the newspaper,” Economic development corporation director Roger Feagley claimed. “There’s no malice intended.”

Feagley further commented on the nature of reinvestment zones.

“A reinvestment zone is nothing more than a geographical area that you’re establishing in a county where a tax incentive may be issued in the future,” Feagley noted.

Feagley stated he believed the investment by BT Solterra into the county was $145 million.

Citizen Mac Pitts spoke to question why a reinvestment zone, once enacted, stays in effect for five years.

Feagley informed Pitts it was actually the case that five years is a minimum: if renewed, a reinvestment zone can last for a maximum of ten years. Pitts had no other questions.

The public hearing was closed at 9:11 a.m. The court unanimously approved BT Solterra’s request for a reinvestment zone.

The court also unanimously approved a 381 agreement for BT Solterrra, the same as they had done in November 2021.

“It’s just an incentive for them to come here,” Newsom noted. Newsom stated he believed BT Solterra would bring from $100 to $140 million to the county in terms of investment.

There was no further discussion regarding BT Solterra.