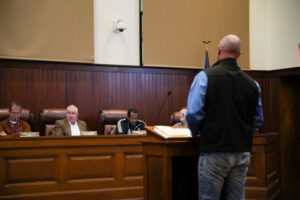 During their regular January council meeting, the city discussed creating a contract with Mike Peitsch, P.E., of Garland,  to plan for future fire stations and Insurance Services Office (ISO) rating for the city.

ISO rating has an outcome on how much homeowners pay on their insurance. Municipalities are rated from one to ten, with one being the best. Better ratings mean a fire department is better able to handle emergencies when they arise– and a lower rating means lower insurance costs, according to the Fire Suppression Rating Schedule.

Sulphur Springs has a Class-2 ISO rating– nearly the best score a municipality can receive.

According to city manager Marc Maxwell, the goal of contracting a fire service expert is to provide insight into the Insurance Services Office (ISO) rating Sulphur Springs receives as the city continues to grow.

“We’re looking at the Thermo site… that brings up the future and how we’re going to provide fire service to the city of Sulphur Springs and still maintain our Class-2 ISO rating,” Maxwell said.

However, Maxwell said, the city isn’t sure where to go next.

Sulphur Springs fire chief David James presented to the council he had located Peitsch by reaching out to nearby cities, including Terrell and Rockwall, and inquiring who they hired to help plan the locations of their fire stations.

“I’ve called ten [cities] around and they’re very pleased with him,” James stated.

Peitsch has 30 years as an employee of the ISO service before he created an ISO consulting service approximately 12-13 years ago, James noted.

“We think this would be some of the best money spent,” Maxwell said.

Council member Jay Julian clarified that the job of Peitsch  would be to strategize the best way to maintain an ISO rating of 2 or higher. Maxwell and James stated Julian was correct.

“Would he tell us if we slipped to a three?” Julian asked.

“I’ll bet he could,” Maxwell noted.

With no further discussion, the resolution was unanimously approved.