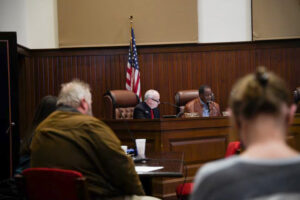 The Sulphur Springs city council discussed county contributions to the Thermo site, among other items of business at the regular January 4 council session.

During new business, the council discussed approved agricultural leases at the Old Thermo Mine property.

“When it went out to bid, $62 is now the market price,” council member Gary Spraggins said.

City manager Marc Maxwell stated he would return to the list of those who wished to lease and select the next two candidates, offering them $62/acre.

Council member Jay Julian noted that Hopkins County was noted as one of the leases, for $2 per year for ag/use of sand for county roads.

Julian stated he had called several local sand/rock/gravel yards, and found the cost of sand to be $3-$4.50 a cubic yard. He also noted the average size of a precinct truck is 12 cubic yards.

Julian said considering the county pay $2 in the Thermo lease, contrasted with the city budget, is stark.

“The library budget is $343,144 this year,” Julian said. “The senior center… has an operations number of $4500 buried in the parks budget… all these entities are located in Sulphur Springs, but everything in Sulphur Springs is in Hopkins County.”

While Julian acknowledged that the county contributes $22,000 to Sulphur Springs Public Library, he stated this was barely 6% of the total library budget.

“I’ve got a little bit of a heartache leasing this for $2 a year,” Julian emphasized.

Maxwell stated that $2 is a historical amount: prior to city takeover of the property in 2018, the county leased the land from Luminant in the amount of $2.

“I didn’t want to hit them between the eyes,” Maxwell said. “They had been leasing it for $2 and wanted to continue to, and I said I’m sure that could continue.”

The reasoning for cooperation with the county, in Maxwell’s opinion, is the future of the Thermo site.

“We will likely create a tax reinvestment zone [at Thermo]. We can do it without them, or we can do it with their 100% participation like we did downtown,” Maxwell said. “In the interest of goodwill… that’s my thought.”

Julian stated his approval of the idea of cooperation by stating “amen.”

Maxwell also noted that only Precinct 2 uses the lease, not all four precincts.

With no further discussion, the council unanimously authorized the leases.