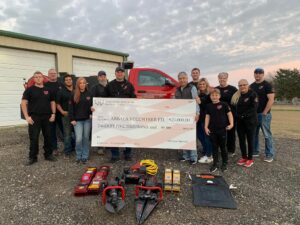 Arbala VFD with Mcglothins and ‘jaws of life’ tools/ courtesy

Arbala Volunteer Fire Department is the recipient of a grant some might call generous, as they recently received $30,000 towards the purchase of rescue equipment.

The supplies mentioned help extricate victims of severe auto crashes who are entrapped in their vehicles. They are components of what the public recognizes as the ‘jaws of life.’

According to member Christy Fairchild, the monetary gift was put to use immediately.

“It was a specific purchase he wanted to make, and it was something we really need,” she said. The VFD can be seen exhibiting the new tools in their group picture.

According to the VFD, the Mcglothins were inspired to make a donation due to the October 2021 kerfuffle between Arbala VFD and the Hopkins County Commissioners court, which led to the court withdrawing Arbala’s funding for a month [see full story].

“Mr. Mcglothlin express [sic] that the citizens come first, and whoever can get there first with the best equipment and training should be dispatched,” Fairchild noted.

Arbala VFD states they are “ready for anything” in 2022.

“It’s a new year, and our firefighters are 100 percent focused on training,” Fairchild said. “Our goal is to save lives and property at all costs– we will be ready!”

CORRECTION: Other Hopkins VFDs stated to Front Porch News they also have the same or similar rescue tools, air lifting bags, and auto jacks. The original article text has been left unaltered.