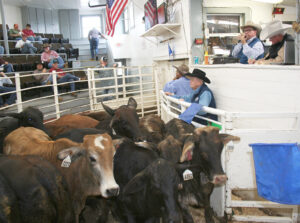 SOLD Auction Joe Don Pogue sells a pen of cattle at the NETBIO pre-conditioned calf and yearling sale Friday. A total of 5,444 head of cattle were sold at an average of over $838 per head.

A total of 187 producer/members consigned and sold cattle in the sale.

“The cattle all looked very good and were in excellent condition,” said David Fowler, co-owner of the livestock commission and a NETBIO director.

“The buyers who come to the NETBIO sales look for quality cattle, and it was again evident that our producers offered the quality cattle they were looking for.”

The next NETBIO sale will be held on Wednesday, January 21, 2022 and will kick off the new sale year. It will be followed by a sale scheduled on Feb. 18. All the NETBIO sales are held at the Sulphur Springs Livestock Auction Market and begin at 1 p.m.