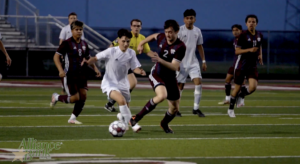 Sulphur Springs opened things up with their first scrimmage against Celina. Osvaldo Arellano scored the lone goal, as the Wildcats pulled out the 1-0 win. The goal came on an assist from Uriel Santacruz.

Their second scrimmage of the day was another tight one, this time against Pittsburg. The Wildcats scored one goal again, while also allowing one goal as they tied with Pittsburg. Sulphur Springs’ lone goal came from Alex Yanez, who was helped out by an Edgar Salazar assist.

In their final scrimmage of the day Sulphur Springs took on Lindale, who was coming off an excellent season last year in which they went 13-1 in district play. Arellano kept his great day, scoring pair of unassisted goals.


Yanez joined back in on the fun, scoring an unassisted goal of his own, as the Wildcats won the game by a final score of 3-1. Although the scrimmages don’t count towards the record, head coach Alexi Upton was thrilled with his teams start to the year.

Both of Sulphur Springs junior varsity teams got some action this weekend as well, starting with their JV2 club tying with Van’s varsity team. Sulphur Springs JV1 pulled out a 5-3 win over Mount Pleasant Chapel Hill’s varsity, with goals from Eduardo Estrada, Daniel Sanchez, Garrett Robinson and Daniel Rodriguez.

“Freshman played well in game one against a varsity team,” Upton said. “JV came out on fire! For a team with three wins last year, they are ready to be more this year!”

The No. 9 ranked Wildcats will look to keep their hot start going with a road match against Greenville Tuesday.