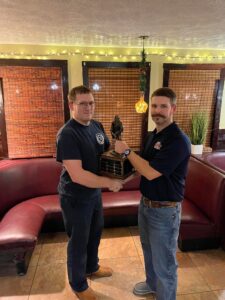 For the year 2021, Cumby Volunteer Fire Department has named Jimmy Helfferich as their firefighter of the year.

Helfferich has served on Cumby VFD for approximately three years, and was awarded firefighter of the year previously in 2019.

Helfferich can often be seen out and about in the community volunteering with Cumby VFD wherever firefighters are needed. This not only includes fighting fire, but also the annual community stew, 9/11 memorial walk, fundraisers, events at BlackJack Park and more.

“If the doors are open on the fire station, he’s there,” said assistant chief Monty Lackey. “It doesn’t matter if it’s because there’s a tone, or a benefit, or anything in between. He puts in a lot of time and a lot of effort.”

“He goes above and beyond, in every aspect, for our Department,” chief Heath McCraw agreed on social media.

Due to his mechanical background, Helfferich completes many of the maintenance for Station 11 vehicles, for which his fellow volunteers are grateful. He also helps to make sure the VFD is up-to-date on Fire Protection Association (FPA) compliance.

“He makes our whole lives easier because he jumps in wherever he’s needed,” Lackey said.

Volunteers also mention that Helfferich “takes the [fire] call if he’s at all able” and is “a heck of a contributor.”

In fact, newly-founded local non-profit The Reinforcement Foundation states that Helfferich’s dedication to his community was one if its early inspirations.

“He was quick to respond to a 911 call and help meet the needs of our founders,” the non-profit said.

When not serving Cumby VFD, Helfferich is an employee of Jay Hodge Chevrolet, and has two children with his wife Whitney. They are Cumby residents and strong supporters of Cumby ISD, where Whitney is employed.

The Cumby VFD would like to thank Helfferich for the role he plays in making the community a great place to live, both in and out of the station.

During the 2021 ceremony to award Helfferich firefighter of the year, the department also honored volunteer Ryan Horne. Horne garnered the award in 2020, but had no formal ceremony at the time due to COVID-19 precautions. Read about Horne’s 2020 award here: https://frontporchnewstexas.com/2020/12/07/ryan-horne-named-2020-cumby-vfd-fireman-of-the-year/

Chamber Connection for 12/8 by Butch Burney