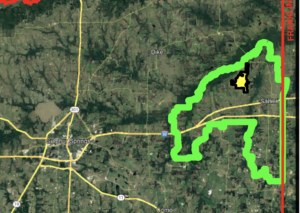 The Hopkins County commissioners court held a public hearing for a solar farm reinvestment zone in Saltillo, among other items of business at their November 22 regular session.

After opening the public hearing for solar comments at 9:24 a.m., no citizens gave comment.

“Basically this is a reinvestment zone for a new– another solar power zone in the Saltillo area,” county Judge Robert Newsom instructed the court.

However, Austin Willis, representing Belltown Power, did speak during the public comment portion.

Willis stated the company was a battery-developer out of Dallas, and had been operating in Northeast Texas for approximately the last five years. Willis further told the court the group has completed a dozen earlier solar projects, making the Saltillo installation the thirteenth or fourteenth.

“We’re very excited about it and the investment it brings to Hopkins County,” Willis said.

The proposed Saltillo installation will be a 140-megawatt project, and Willis claimed that his company would generate “about a million dollars a megawatt” for $140 million total.

According to Willis, the company projects a mid-2022 groundbreaking with a mid-2023 operation goal.

Commissioner Pct. 3 Wade Bartley clarified the scope of the project: the proposed Saltillo installation would be situated on the properties of Delbert “Chip” Tully and Los Senderos Ranch, encompassing approximately 1,430 acres.

With no further discussion, the public hearing was closed at 9:26 a.m.

The court then moved on to a 380 agreement for the proposed Saltillo solar installation. Newsom stated the agreement would be postponed to another commissioners court meeting.

A previous version of this story incorrectly identified Pct. 2 Commissioner Greg Anglin as the one who clarified the scope of the project. The story has been amended to reflect the correct commissioner.