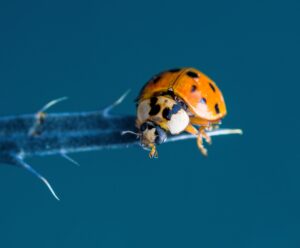 Recently some  Extension offices in northeast Texas have receiving an unusually high number of calls about lady beetles inside homes.  The culprit is an exotic lady beetle called the multicolored Asian lady beetle (MALB).  While not new, high aphid  populations in some trees last year are thought to have contributed to this year’s higher than normal number of these “naughty lady beetles”.

According to Extension entomologists, the multicolored Asian lady beetle is normally a helpful insect that eats aphids.  Studies of the beetle in its native Asian habitats showed that it was such an efficient predator that for many years the U.S. Department of Agriculture tried to import them.  Ironically, after repeated failures to get the beetles to establish here, the beetles mysteriously appeared on their own in a number of states during the early 1990s.  Whether these beetles were survivors of earlier deliberate importations, or whether they found their way to the U.S. on their own, no one really knows for sure.  But its’ one bad habit has many homeowners wishing this beetle might have stayed back in Asia.

The multicolored Asian lady beetle is unique among major lady beetles in its behavior of routinely invading homes and buildings in the fall.  In its native home in Japan, this beetle quietly disperses into the white limestone bluffs along its riverside feeding grounds.  But in the U.S. it has become a significant pest when it seeks shelter in the walls and attics and living areas of homes. The beetles seem to become pests more often in homes surrounded by trees and forests.  They also seem to be attracted to homes of lighter or contrasting colors.  The adults enter homes through any available crack or crevice and may aggregate in attics or even living areas of the home.

Although mostly harmless, like some other common lady beetles, MALBs are occasional “nippers,” biting skin if they come in contact with humans.  They also let off a disagreeable smell when disturbed, and medical reports exist of people developing allergies to the chemicals emitted by lady beetle aggregations. But mostly these beetles are a simple nuisance, unwanted and sometimes cursed.

Although homes were invaded in the fall, this winter’s up and down temperatures have caused these beetles to get restless and move about the home in search of a way out.  When daytime temperatures reach the 80s outside, attic temperatures may reach the 90s, fooling the beetles into thinking that spring has arrived and sometimes sending them into living areas of the home or building.

There are no easy ways to prevent MALB from entering homes or controlling them once inside. Caulking and sealing outside entry points is perhaps the most effective technique.  Use of residual insecticides around areas that are not easily sealed may provide some temporary control of lady beetles attempting to enter homes.  Pyrethroid insecticides are usually good for this purpose.

Once inside, the beetles are best controlled by vacuuming.  Spraying insecticides on aggregations of lady beetles will  result in piles of dead insects, and undesirable smells.  Discard your vacuum bag after use if you don’t want a smelly vacuum.  Bug bombs, light traps and lady bug houses are not effective at ridding homes of these beetles. Once the weather completely warms up, the lady beetles will eventually find their way out of the house and on to their worthy pursuit of aphids.  Until that happens, you may have to just continue to vacuum these little guys up as long as they are found.

For more information on this or any other agricultural topic please contact the Hopkins County Extension Office at 903-885-3443 or email m-villarino@tamu.edu.

Chamber Connection for 11/17 by Butch Burney