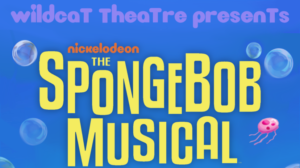 Wildcat Theatre is proud to present the critically-acclaimed, Tony award-winning The Spongebob Musical. SpongeBob and his friends spring from television to the SSHS stage in an exciting event featuring original music from superstars of all genres with original songs by Cyndi Lauper, John Legend, David Bowie, Panic at the Disco, Steven Tyler, T.I., and so many more. Declared brilliant by the New York Times, with its message of inclusivity and fun-for-the-whole-family community-oriented humor, this show is a must see.

Junior Austin Crump leads The SpongeBob Musical cast as SpongeBob. He is backed up by seniors Savannah Lilley as Sandy, AllieGrace Woodard as Patrick, Lucy Braddy as Mr. Krabs, Emilie Gotcher as Squidward, and RJ Penny as Plankton, junior Danielle Verlander as Pearl Krabs, and freshman Aiden Woodard as Patchy the Pirate.

Show dates are November 11th and 13th at 7pm and November 14th at 2pm. Tickets are $10 from any cast/crew member or online at bit.ly/wildcattheatre. $15 at the door. SSHS Auditorium.