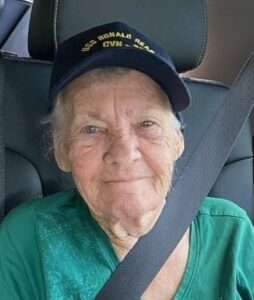 A memorial service for Joyce Mahnke, age 85 of Sulphur Springs, TX will be held on
Sunday, November 21 from 2-4pm at 901 Industrial Dr. W. in Sulphur Springs, TX 75482.
Mrs. Mahnke passed away on Sunday, October 31, 2021 at Christus Mother Frances – Tyler,
TX.
Joyce was born on February 14, 1936 in Pampa, TX to James and Lois Northcott. She
married John Mahnke in 1954 in Las Vegas, Nevada and together they raised five sons and
one daughter. Joyce worked various jobs throughout the years ranging from a school bus
driver to a dietician for juveniles in need. She was a mother, grandmother, great-grandmother,
aunt, and a friend to anyone who needed a shoulder to lean on. Joyce had an unshakable faith
in God’s goodness, and that he was in control of all. In 1989 she was diagnosed with bone
cancer and bravely underwent one of the first bone transplants in the country. She was in a
body cast for six months and needed crutches from then on, but that did not stop her from
tackling all that life offered. She was a force in everything that she did and was truly a free
spirit that could not be contained.
Every day was an adventure and she approached them with the unbridled enthusiasm that only a truly adventurous spirit could grasp. Her heart was of a magnitude not often seen on this earth. Joyce took in and raised countless family, extended
family, and at times total strangers.
Many of them, she brought to know her Savior, Jesus
Christ. Like a ripple in a pond ever circling out wider, she touched so many and her touch
spread so far, leaving a mark that is too big to fully comprehend. Joyce loved the outdoors
and spent most of her time there. She was always up for playing a game of football,
basketball, baseball or anything that came her way. From forty mile mountain hikes at forty
years old to outswimming everyone in the family on the Fourth of July at eighty four years
old. She climbed the roughest mountains and swam raging rivers. She was completely
fearless in all that she did.
She loved her family, children and animals but most of all she
loved her husband, John, of 62 years, and they had a love that was complete. It was an honor
to be raised by her. Joyce instilled in each one of us the belief that we could do and
accomplish anything, chiefly because she truly believed we could. Her legacy will live in the
faith and strength she has left in the hearts of her children, grandchildren, great-
grandchildren, and countless others that her helping hand has touched.
She was a member of the Calvary Baptist Church of Sulphur Springs, TX and the Broken
Arrow Baptist Church of Sunsites, AZ. The relationship with her church family was one that
she held near and dear to her heart.
She is survived by her sons: Raymond Mahnke, John Scott Mahnke and wife Katy, Charles
Mahnke and wife Debra; and her daughter: Barbara Hanaghan. Her grandchildren: Brandon
Mahnke, Joseph Mahnke, Angela Newhouse, John Mahnke, Daniel Mahnke, Julie
Hollibaugh, Joshua Morton, Rebekah Mahnke, Rachel Mahnke, Christian Hanaghan and
Laina Hanaghan. Great-grandchildren: Kynli Stewart, Shawn
Stewart, Susan Mahnke, Kera Mahnke, David Mahnke, Emily Mahnke, Kylie Turnipseed,
JesMae Hollibaugh, Wyatt Hollibaugh, Braxton Morton, Braxton Mahnke and Mackenna
Mahnke.
Joyce is preceded in death by her parents; husband: John Christian Christopher Mahnke; and
sons: James Mahnke and Winton Mahnke, and is reunited with them now in Heaven.
Arrangements under the direction of Murray-Orwosky Funeral Home.
previous post