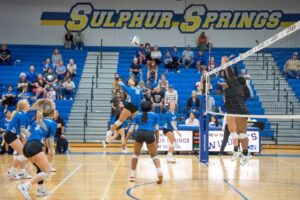 The Sulphur Springs Lady Cats volleyball season came to an end recently, falling in the first round of the playoffs to a strong 38-6 Lufkin team. Monday the All-District awards were announced and the Lady Cats had a number of players recognized for their strong play this season.

Sulphur Springs had a pair of players that took home superlative awards, seniors Brooklynn Burnside and Peyton Hammack. Burnside was named the Blocker of the Year, consistently protecting the new for the Lady Cats. She finished the year with an impressive 141 total blocks, including 72 solo blocks, averaging over one block per set and just under four blocks per match.

Along side her was Hammack who was named the Setter of the Year. Hammack finished the year with an outstanding 806 assists, racking up 6.5 assists per set. Hammack also had multiple 30+ assist games throughout the season, consistently setting up her teammates and pacing the Lady Cats’ offense.

Sulphur Springs had a pair of players who were named First Team All-District, senior Parris Pickett and junior Laney Hurst. Pickett and Hurst each played huge roles in the Lady Cats’ defense this year, as Pickett led the team in digs. She finished the season with 448 digs, averaging over 12 per match.

Hurst also had an impressive season, finishing with exactly 250 digs on the year. Combining for 19 digs per match, the two played a significant role for Sulphur Springs this season.

The Lady Cats also had a pair of players who were named Second Team All-District, juniors Addisyn Wall and Mali Maeker. Wall was the second leading attacker for the Lady Cats this year, a role she should see be expanded even more next year, racking up 212 kills on the year. Maeker was one of Sulphur Springs’ leading servers this year, finishing with 59 aces and 239 serve points, both of which were the second most on the team behind Hammack.

The Lady Cats also had a number of players who were named Honorable Mention, including AJ Dodd, Kinslei Smallwood and Myssiah Dugan.

Hammack and Pickett were each named Academic All-State as well.

Sulphur Springs finished their season with an overall record of 19-18. Their 7-5 district record was good enough for fourth place in their district, earning them a spot in the playoffs.

In the bi-district round the Lady Cats got the tough task of going up against the Lufkin Lady Panthers, who were 37-5 on the year. Sulphur Springs lost in straight sets, although each set was close, losing by scores of 25-22, 25-19 and 27-25.