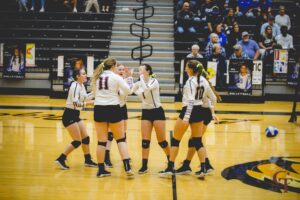 The Cumby Lady Trojans traveled to Mount Pleasant Thursday, ready to face Hawkins in the Area round of the playoffs. Coming off a 3-0 win over Rivercrest in the Bi-District round, the Lady Trojans were ready to face a tough Hawkins team who went 36-5 in the regular season and 11-0 in district play.

The opening set began with both teams trading points back-and-forth until Cumby found some momentum. With the score at 7-6 a kill from Neely Hammond ignited a 5-1 run for the Lady Trojnas, forcing Hawkins to use a timeout to try and regroup.

From there it was Heather McCraw who took over, coming up with a pair of big blocks to keep the momentum going in Cumby’s favor. Erin Morgan followed with a pair of kills in the final few possessions, as the Lady Trojans went on to take the opening set by a final score of 25-14.

McCraw kept her strong play going to open the second half, scoring on a kill and a block on the first two possessions. However, Hawkins answered back with their best run of the night, scoring on 14 of the next 20 possessions to take a 14-8 lead.

It was once again McCraw who came in and put an end to the run, scoring on back-to-back plays. Morgan followed with a kill of her own and the Lady Trojans quickly found themselves back in the game, taking their first lead at 20-19, thanks to a kill from Ashlyn Hudson.

The game stayed tight, with the two teams tied up at 22-22. The Lady Trojans were able to put the set away as they scored on the next three possessions, thanks to kills from McCraw and Hammond, winning the set 25-22.

Finally, hoping to put their opponents away in straight sets, the Lady Trojans got off to a hot start in the third set, getting out to a 9-5 lead. Hawkins began to fight their way back in, but a kill and an ace from Hudson kept Cumby on top.

Hawkins continued to play well, even taking a two-point lead late in the set before Cumby scored four straight points to go ahead 19-17. The two teams needed extra time to decide the third set, with things all tied up at 25-25.

After scoring and needing just one more point to put the game away, McCraw came up with a huge block, taking the set 27-25, as well as the game 3-0.

“Our Lady Trojans were moving left and right and Heather McCraw was big at the net, she had seven solo blocks,” head coach Marissa Medrano said. “It was definitely a team effort and the girls play fabulous.”

Leading the way offensively was Hammond who had a team-high 10 kills. She also tied with Morgan for a team-high in digs with 14. Morgan also had a great all-around game, finishing with eight kills and three block assists as well.

McCraw played a huge role in the Lady Trojans’ 3-0 win, providing seven kills and seven blocks, as well as a pair of digs. Just behind her in kills was Hudson who had six, as well as eight digs and four total blocks.

Cumby got strong defensive contributions from a number of players, including Savannah Kurn who had an impressive 11-dig outing. Kaylee Bloyed had six digs of her own, while Kelcie Fite had five digs.

Azlyn Hornsby had a strong outing of her own, turning in six digs, three kills and one block assist.

The win advances Cumby to the Regional Quarterfinals round of the playoffs. Updates on that match will be published on Front Porch News as soon as it is made available.