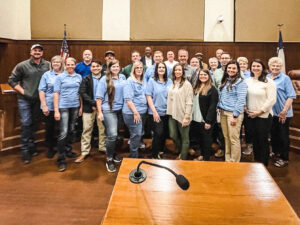 The Sulphur Springs city council discussed a no-parking zone and the city attorney position, among other items of business at the regular Nov. 2 council session. After an invocation by council member Freddie Taylor, the meeting was opened at 7:03 p.m.

Mayor John Sellers shared during presentations, proclamations and announcements that he had been a member of the crowd that gathered to welcome The Wall That Heals to Sulphur Springs, and urged citizens to visit the historical installation to pay respects to the fallen soldiers of the Vietnam War.

“It’s very exciting because we’re one of the few places in the United States that has the opportunity to have that wall,” Sellers said.

Sellers also welcomed the Adult Leadership Class to the gallery for the city learning experience.

No action was taken on the manager’s report, as none is required.

The following 380 agreements were approved unanimously:

The council unanimously passed the first reading of an ordinance which provides for the rewriting of city ordinances.

The measure will update current ordinances to correct existing editorial or grammatical errors therein. For example, agency and commission names have been updated, and terms that exist in 2021 did not previously exist when laws were first created in the 1950s. This project has been in the works for ten years, according to city attorney Jim McLeroy.

“We want to publish our code and be proud of it,” McLeroy said. Council member Jay Julian asked if the changes were “non-substantial” and McLeroy said Julian was correct.

The council will revisit the issue in December.

The council unanimously passed an ordinance to create a no parking zone between East Shannon to Mockingbird Lane, provided it is approved by TxDOT.

“We have an issue with vehicles parking… from Chili’s down to McDonalds,” SSPD chief Jason Ricketson presented. “When you try to leave to get out, it’s nearly impossible to see,”

South Broadway is technically a state highway, Ricketson noted, but the city will pay for the no parking signs.

“If anyone sees something like this, it takes someone saying something,” council member Doug Moore emphasized.

The city received $4.22 million from the American Rescue Plan Act, according to finance director Lesa Smith. Approximately half of the funds have already been deployed, according to Smith.

Following the 6 p.m. executive session regarding personnel matters, the council unanimously affirmed that Nate Smith will take over as the city attorney as of December 8, 2021. Current city attorney Jim McLeroy will continue as an assistant until December 31, at which point he will retire.

Jeannie Perkins appeared to thank the council for their generous donation to Main Street Theater for its repair. She spoke regarding their future meetings and board elections as well as the Community Chronicles that will be released on November 15.

With no further business, the meeting was adjourned at 7:44 p.m.

Abbi Beggs and Logan Vaughan contributed to this report.