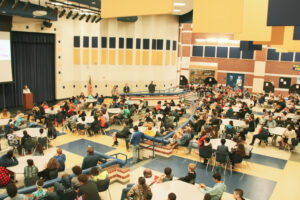 Rockwall teen suicide prevention foundation Hanna 4 Hope made a visit to several SSISD schools on October 28 and 29 to educate kids of all ages on how to spot depression in their peers.

According to the presentation given by director Dr. Karla Hutcherson, M. Ed, counselor, suicide is the leading cause of death in ages 10-24 and has increased in recent years. Sixty percent of teens know someone who will attempt suicide, and major depression is the most common illness that ends in suicide.

“We want to get the word out how important it is to let people in your life know you’re struggling,” Hutcherson said.

Such was the case of Hanna Clark. Hanna’s mom Raina shared with Hopkins teens how Hanna was a normal 15-year-old who went through a tough breakup.

“She made a permanent decision for a temporary situation,” Hanna’s mom said.

Now, Hanna’s family and Hanna 4 Hope want to educate other teens on signs to look for in their peers. According to Hutcherson, having friends or a peer group is a main indicator that someone will recover from depression along with starting treatment for depression and participating in therapy.

Hutcherson encouraged kids to help their friends set goals for the future, and build up reasons for living. Additionally, to avoid bullying, “stop and think about what you say and do,” she said.

“Show that you care and take suicide seriously,” the foundation urged.