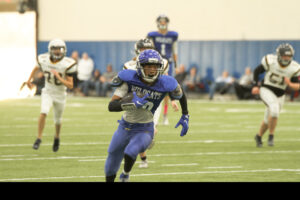 Thursday nights, Freshman Wildcat football game against the Forney Jackrabbits saw a change of venue due to weather.  The Wildcats proceeded with their game in the multipurpose building, which was an interesting change for everyone, fans included.  The Freshman team started off strong and held Forney strong, walking away with the win 34-12.

After forcing Forney to a quick three-and-out the Wildcats scored on a long outside run by Larren Vaughn. The extra point came up short. Special teams got in on the action when Mattieu Munoz recovered an onside kick on the ensuing kickoff.

The Freshman ground game kept rolling on the next possession. The combined Wildcat backfield of Vaughn, Dedrick Rose-Luke, and Malachi Clayton kept the ball moving. The drive was finished off by a strong tackle, breaking run by Malachi Clayton. Extra point came up short.

Matthieu Munon jumped for a second consecutive onside kick to give the ball back to the Wildcats. The third touchdown was put on the board with a quick swing pass to Chris Adams. The extra point was good, making the score 19-0.

The Freshman defense bent but did not break. Forcing the Jackrabbits into 4th-and-goal from the 23. Skylar Lewis picked off a pass in the end zone and brought the ball back to the 40.


The Cats kept gambling for it on 4th-and-long, converting on a pass play to Clayton. The offensive line continued to dominate the line of scrimmage. The Wildcats put the ball in the end zone for the fourth time in the first half on a swing pass to Nathan Andrews. Lewis completed a two-point conversion to make the score 27-0.

Forney took the next possession and drove to the 10-yard line, the young defense held again when Rose-Luke picked off a tipped pass and returned the ball near midfield. Three plays later Vaughn scored his second touchdown of the night on a solid run up the middle for 20 yards. Extra point was good.

Dejavu when the Wildcats defense picked off Forney’s pass for the third time in the first. Lewis jumped in front of the Jackrabbit receiver to take the ball away and return it to the 35. Wildcats took a dominating 34-0 lead into halftime.

Forney finally got on the scoreboard with a short pass from the 10-yard line late in the third quarter.

The Jackrabbits added a touchdown deep into fourth quarter on a two yard run but were unable to convert the two point conversion making the score 34-12. Wildcats ran out the clock to seal the win.  The last game of the season for this Freshman team will be next Wednesday at North Forney.