Lady Trojans season comes to an end, as they prepare for playoffs 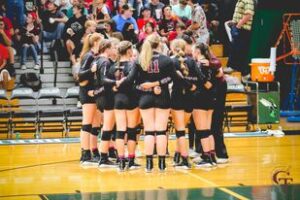 The Cumby Lady Trojans wrapped their season up Tuesday, as they prepare to enter the playoffs. Courtesy/ Steve Hammond

The Cumby Lady Trojans traveled to Quinlan Tuesday to face Boles for their final regular season game of the year. Cumby entered the game with a district record of 10-1, with their only loss coming at the hands of Boles. The Lady Trojans were also riding a four-game winning streak, looking to enter the postseason with as much momentum as possible.

Looking like they were possibly going to have the upper hand this time around, things continued to stay close the remainder of the game. Cumby put up another strong effort in the second set, but they fell just short, with the final score being 25-20.

The third set was yet another close one, but Boles was able to squeak by once again, this time 25-19. Needing to win the fourth set to keep their hopes alive, the Lady Trojans gave Boles everything they had.

It would take extra time to get the job done, but Boles was able to hold on to the 27-25 win, putting the game away in four sets.

Heather McCraw had a huge game for the Lady Trojans, finishing with team-high’s in kills (9) and blocks (4). She also posted five digs in an all-around strong performance.

Just behind her were Azlyn Hornsby and Neely Hammond who each had well-rounded games of their own. Hornsby had eight kills and five digs, while Hammond had seven kills and eight digs.

Setting things up was Erin Morgan who finished with 17 assists and a team-high 11 digs. She also had six kills of her own in the 3-1 loss.

Defensively Cumby got contributions from a number of players. Savannah Kurn had a strong outing with seven digs, while Kaylee Bloyd had six digs and Kelcie Fite had five digs. Ashlyn Hudson had six digs, as well as three kills and a pair of blocks.

The loss drops Cumby’s district record to 10-2, but puts them in a very strong position as they enter the postseason. Update on their postseason information, as well as coverage of their playoff games will be published on Front Porch News.