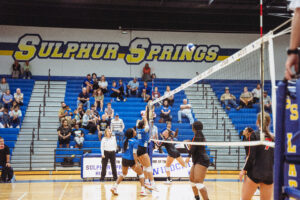 The Sulphur Springs Lady Cats traveled to Longview Tuesday, looking to grab one final win before their regular season came to an end. With the playoffs quickly approaching, Sulphur Springs was hoping to gain as much momentum as possible entering the post season.

Senior Myssiah Dugan gave the Lady Cats a jolt of energy early in the first set with a huge block. While the Lady Cats tried their best to set the tone, Longview stayed on top the remainder of the way, taking the opening set by a final score of 25-21.

Needing to bounce back in the second set and take control of the game, senior Brooklyn Burnside came up with a big kill to give Sulphur Springs a 5-4 lead. Later in the set it was sophomore Kinslei Smallwood whose kill put the Lady Cats ahead 12-8.

The Lady Cats continued to control the flow of the game, as senior Peyton Hammack’s block gave Sulphur Springs a four-point lead late in the set. Burnside followed with a block of her own a few possessions later, as the Lady Cats went on to even things up 1-1 with a 25-19 win in the second set.

The third set was pivotal, with neither team looking to give an advantage to the other. With the score tied halfway through the set senior Parris Pickett gave her team a 12-11 lead with an ace.

A Burnside block a few possessions later gave the team a two-point lead and the Lady Cats began to pull away. With the score 24-18, junior Addisyn Wall put the set away with a kill, giving Sulphur Springs the 25-18 win and putting them ahead 2-1.

The fourth set started off close again, as Hammack gave the team a 5-4 lead with an ace. Unfortunately for the Lady Cats they were unable to put the game away, as Longview battled back to force a fifth set.

In the fifth-and-deciding set, Sulphur Springs opened things by going on a 6-1 run. Later in the set a Smallwood block put any idea of a Longview comeback away and the Lady Cats went on to take the set by a final score of 15-7.

Wall and Burnside led the offense, finishing with 17 kills and 16 kills respectively. Burnside also had a team-high six total blocks, as well as four digs.

Setting things up was Hammack, who had an impressive 32-assist outing. Hammack also had 13 digs, five kills, three blocks and three aces in the 3-2 win.

Defensively Sulphur Springs had a number of contributors, with junior Mali Maeker leading the way with 16 digs. Also finishing in double-digits were Pickett with 13 digs and Laney Hurst with 12 digs.

The Lady Cats finish their regular season with a record of 19-16 and 7-5 in district play. They begin post season play Monday in their bi-district match against Lufkin. The game will be held at Tyler High and is set to begin at 6:30 p.m.

Lady Trojans season comes to an end, as they prepare for playoffs