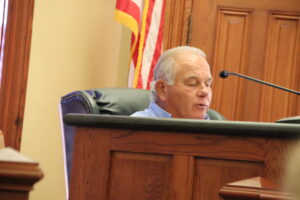 The Hopkins County Commissioners Court discussed equipment purchases and the towing advisory board, among other items of business at their regular Oct. 25 session.

The court then discussed purchasing several pieces of equipment.

“We had a backhoe that had problems in the summer… so we’ve been short a backhoe now two, three, four months,” Pct. 3 commissioner Wade Bartley stated. Funds will come from the American Rescue Plan Act.

“This will be for a motor-grader… to replace one that I had for many, many years. I will be looking into possibly selling the old one in the near future,” Pct. I commissioner Mickey Barker said. Funds will come from the American Rescue Plan Act.

“Bomag is the brand-name, this is actually a deplaner that tears up the road and mixes the existing oil sand,” Barker said. “I have been leasing, and now would be looking to finance this particular unit.” Funds will come from the American Rescue Plan Act.

The court unanimously approved an oil, gas and mineral lease at Rushing Cemetery. County Judge Robert Newsom noted that although he attempted to find the parcel of land indicated in the William Gregg Survey as between Birthright and Tira, had been unable to locate it.

“My son and I went out there looking one afternoon, we never did find it,” Newsom stated.

The lease has been in place since 2004 Newsom said, and renewing the lease was “a regular thing.”

The court unanimously accepted $39,365 as part of a lawsuit settlement against Johnson & Johnson and Perdue Pharma for their role in the opioid crisis, according to Newsom.

“We did have quite a problem with the opioids, it’s better now,” Newsom said. He noted the settlement funds will go towards drug prevention programs, and that the county has other outstanding lawsuits they expect settlements from regarding the opioid epidemic.

The court unanimously appointed Calyn Flores as a member of the Hopkins County Non-Consent Towing Advisory Board, as a previous member of the board had died before reinstatement.

“We haven’t had a meeting in just a while, so we’re fixing to have one soon,” Newsom said.

The court had no budget amendments or line item transfers.

The court had no personnel matters.

The court had no disposal of assets.

The court approved a continued yearly allocation for 2022 to Texans Feeding Texans, a Lamar County home-delivered meal grant program which provides 3,000 meals in Hopkins, according to coordinator Carly Welch.

With no further business, the court was adjourned at 9:25 a.m.