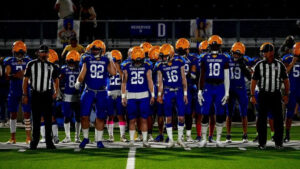 The Sulphur Springs Wildcats hosted the Greenville Lions Friday, looking to pick up their first win of the season. After falling just short in their most recent game to Corsicana, the Wildcats entered the game with the most momentum they have had all season.

Greenville got on the board first, taking an early 7-0 lead, but Sulphur Springs answered back with some offense of their own. Sophomore quarterback Brady Driver hit receiver Weston Fields on a 54-yard pass, putting the Wildcats in scoring range. Driver then found CJ Williams on the following play for a six-yard touchdown pass, evening things up at 7-7.

With both offenses rolling, the Lions went down the field and found the end zone again, taking their lead back. After a missed PAT Greenville took a 13-7 lead, still in the first quarter.

With a chance to take the lead, Sulphur Springs got to work with a pair of passes, which each resulted in a first down. Later in the drive senior running back Douglas Deloney broke off a 22-yard run to put the Wildcats in the red zone.

On the following play the Wildcats ran a read option, where Driver decided to keep the ball, running it in from the 14-yard line to give Sulphur Springs their first lead of the night at 14-13.

The Wildcats got a stop and got the ball back, this time with a chance to extend their lead. On third-and-six, Driver hit junior tight end Luke Caton on a 12-yard pass to keep the drive alive and move into Greenville territory.

Later in the drive Sulphur Springs found themselves in another third and long situation, this time a third-and-seven from the 18-yard line. Driver dropped back and was under pressure, having to leave the pocket before he found Williams. Williams caught the pass in the backfield and broke a number of tackles before finding the end zone to extend Sulphur Springs’ lead to 21-13.

In his second start for the Wildcats, Driver finish the game with 191 passing yards, as well as two touchdowns and two interceptions. Driver was also the teams leading rusher, picking up 146 yards on 18 carries, finishing with a combined 337 total yards. Driver also had one rushing touchdown, giving him three total in the game.

Fields was once again the leading receiver for the Wildcats, grabbing four caches for 81 yards. Williams had a strong game, catching two passes, both of which were touchdowns for 24 yards.

Defensively Sulphur Springs was led by juniors Riley Hammons and Nick Cantillo. The two have led the Wildcats defense all year long, and did so again with nine tackles each. Seniors Devon Franklin and Madison Martin each had strong games as well, as Franklin had two tackles for loss, while Martin had one.

Senior Korderrion Turner had the only interception of the game for Sulphur Springs.

After narrowly missing their first win of the season, the Wildcats return home this week for their final home game of the season. They will host the Forney Jackrabbits who are currently 4-1 in district play and 5-3 on the season. The game is set to kickoff at 7:30

p.m. Friday and will be the teams Senior Night game.

Wednesday head coach Greg Owens will have his weekly press conference to address this week loss, as well as look ahead to Friday’s match against Forney.

SSISD Athletic Schedule for Week of 10/25