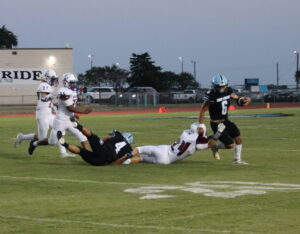 Avelrado Villa breaks a tackle during the Prairieland game

The Como-Pickton Eagles hosted the 5-2 Celeste Blue Devils Friday. With an 0-3 district record, the Eagles were hoping to get their first district win of the season, as well as snap a three-game losing streak.

The Eagles found the end zone for the first time in the third quarter when Avelrado Villa ran it in. Como-Pickton got the two-point conversion, and cut the score to 14-11, putting themselves in a good position to get back into the game.

Unfortunately for Como-Pickton their offense never found the end zone again. Celeste added another pair of touchdowns as insurance in the final frame, winning the game by a final score fo 27-11.

Ian Rodgers was the leading rusher for Como-Pickton, picking up 56 yards on 13 carries, averaging just under 4.5 yards per attempt. Rodgers also had their one two-point conversion of the game.

Behind him was Villa, who had 38 yards on 20 tries. Villa had the lone touchdown of the game for the Eagles. Ulyses Garza added 20 yards on just five carries, while Kevin Hernandez had 12 yards on five tries.

Defensively the Eagles were led by Caden Perez and Tucker Rutledge who each had 13 carries. They also each had one tackle for loss, as did Chris Ramirez and Koby Perez. Braxton Andrews had the only interception of the game for the Eagles, as well as six tackles.

Other notables for the Como-Pickton defense were Cash Wilton with nine tackles and Jermaine Guiterrez who had seven tackles.

The loss drops Como-Pickton to 2-6 on the year and makes them the only winless team remaining in their district at 0-4. The Eagles will have a tough test this week when they travel to Cooper to take on the 8-0 Bulldogs Friday.

The Eagles return home for their final regular season game Friday, Nov. 5 to face Alba-Golden. The Alba-Golden Panthers are currently 4-4 on the year and 1-3 in district play. Both of their final games will begin at 7:30 p.m.