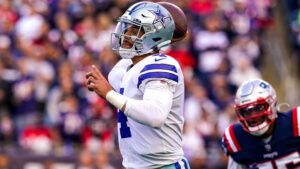 We have officially reached the quarter pole of the 2021 NFL season. Well, thanks to the new 17 game schedule we reached that point after the end of the first quarter this past weekend. With that being said, let’s talk a little bit about America’s Team.

After a dominant 44-20 win over division rival New York Giants on Sunday afternoon, the Dallas Cowboys appear to once again be ruling the NFC East. The offense has been humming along this season with the return of star quarterback Dak Prescott, and the re-emergence of Ezekiel Elliott. But the offense has not been much of an issue, when healthy. In recent years, the team’s Achilles heel has been the defense. However, this season they seem to have corrected that issue.

Coming off a historically bad year where they allowed the most points in the history of the storied franchise (473 total points / 29.6 per game), they appear to have bounced back nicely under new defensive coordinator Dan Quinn. Most recently, Quinn was the head coach of the Atlanta Falcons (2015-2020) and was let go 5 games into last season following an 0-5 start. Prior to his stint with the Falcons, he was the Defensive Coordinator for the Seattle Seahawks from 2013-2014 where he led his “Legion of Boom” defense to a decisive 43-8 victory over the Denver Broncos in Super Bowl XLVIII. You may also remember Quinn’s Falcons holding a 28-3 lead in Super Bowl LI before losing 28-34 in OT.

Although his Falcons defensive squads never lived up to the expectations many had when hiring a top defensive coach, he was a very welcomed hire to most Cowboys fans following the aforementioned 2020 debacle with former coordinator Mike Nolan. Through four games, the Cowboys are second in the league defensively in total takeaways (12), and are first in the entire league in interceptions with 10 (they had 10 total last season) and turnover percentage (21.8%). While those are outstanding numbers, the question remains: Is this sustainable? Turnovers themselves have long been viewed as an aspect of luck defensively, or more so as a statistical anomaly. It’s always beneficial for defenders to be in play for turnovers, but you cannot rely on them and continually expect success.

So, now that we’ve laid out the good part of the Cowboys defensive unit, let’s look at a few concerns moving forward.

The Cowboys currently give up 6.3 yards per play which ranks 30th in the NFL, behind only the Detroit Lions and Kansas City Chiefs. Both of those teams are considered defensive laughingstocks. The defense also leads the league in penalties accepted, with 46 penalties through five games. They are middle of the pack with pressure rate, sack rate, and hurries. Those rates could easily be explained by a relatively low blitz percentage of 17% (Tampa Bay leads the league with a 40.2% rate). Finally, they have 29 missed tackles which is tied for 7th worst.

Let me be very clear to you, dear reader. I think this defense has made huge strides compared to the 2020 Mike Nolan Experiment. There is a wealth of young talent on that side of the ball. Micah Parsons looks like he’s well on his way to Defensive Rookie of the Year. Trevon Diggs has 6 INTs and 10 defended passes, which are insane numbers after 5 games. Leighton Vander

Esch is currently healthy and that’s been his only knock throughout his short career. Osa Odighizuwa is getting to the quarterback at a solid rate. They are playing much faster this year, showing a well-coordinated effort from Quinn. However, they have to play more disciplined in their run fits and play more disciplined in the secondary. Both of those things are fixable with a young, hungry defense in a new scheme.

I am not so hesitant when I say that I expect the Cowboys defense to improve throughout this year, and moving forward into next year. There are a lot of bright spots with this team, and I’m not too sure Cowboy fans have been able to say that recently.