Four Wildcats to be inducted into Hall of Fame

Four former Sulphur Springs athletic greats will be inducted into the Sulphur Springs High School Hall of Honor in pre-game ceremonies Friday night, October 22, before the football game against Greenville.

A former NFL player, a record-setting girls soccer player, a state medalist distance runner and a defensive standout on the 2008 state championship football team will all be added to the Hall of Honor in a reception beginning at 5:15 p.m. Friday in the Multipurpose Building, and then they will be introduced at 7 p.m. at Gerald Prim Stadium.

The public, friends and fans are invited to the pregame reception and ceremony. 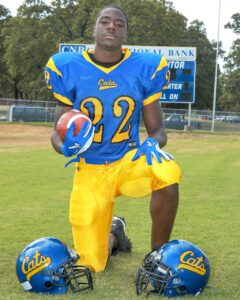 Keenan Clayton was an All-State football player for the Wildcats who received a scholarship to play for The University of Oklahoma and later played in the NFL.

Clayton was a 3-year letterman at SSHS and finished his senior season ranked as the No. 3 safety in the country, the No. 8 player in the state and No. 74 nationally. He was named All-State his junior year as a kick returner and All-State his senior year at safety. He also was voted All-District both years, including being named District MVP his senior year.

As a senior, Clayton had a team-high 111 tackles along with four interceptions and two defensive touchdowns. Over his three years as a Wildcat starter, he had 221 tackles, seven interceptions, a school-record seven kickoff returns for touchdowns and also played running back.

He was heavily recruited by several schools and chose Oklahoma, where he was moved from safety to linebacker after his freshman season. He forced a school-record six fumbles as a junior at OU, and his nine passes broken up were the second most by a linebacker in school history. He was voted All Big-12 by the coaches and AP.

He now lives in Sulphur Springs and is a member of the Wildcat coaching staff.

Keenan is the son of Quon Clayton and the grandson of Frank and Mardell Clayton.

His award will be presented by Brad Turner, his former high school coach. 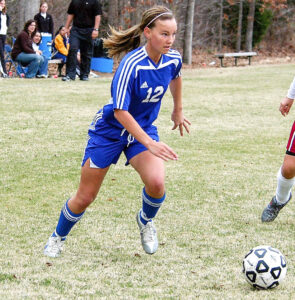 Gayle Grand-Lienard Bowman, who set the school record for career goals scored while playing Ladycats soccer, will be the first girls soccer player inducted into the Hall of Honor.

Gayle’s senior year, she was the Ladycats’ team captain and Forrest Gregg MVP Award winner. She also scored 16 goals in the team’s first 11 games. She played club soccer for FC Texas East ‘88 her junior year and FC Dallas Youth East ‘89 her senior year. A versatile athlete, she was also a three-year letterman in cross country and track.

She received a scholarship to play soccer at Texas Woman’s University, where she played in 71 games with 25 starts over her four-year career. She helped lead the team to two Lone Star Conference tournament appearances and received the team’s Rookie of the Year award as a freshman.

Gayle graduated from TWU with a Bachelor in Business Administration degree majoring in Marketing in 2011.

She has been married for nine years to Ethan Bowman, and they have a 3-year-old daughter, Ellis, and a 2-year-old son, Wells. They reside in Rockwall, where she has worked at Special Products and Manufacturing for 10 years. Gayle and her husband also own and operate Rockwall Fit Body Boot Camp.

Gayle’s parents are Rob and Diana Grand-Lienard, and she has two siblings, Jim Grand-Lienard and Abby Swanson.

She will be presented her award by her high school coach, Joel Bailey. 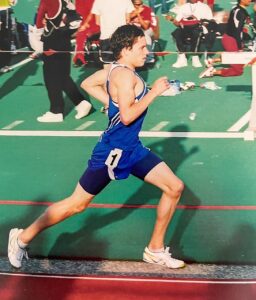 Graham Northcutt was a multi-sport athlete but gained the most prominence on the track and in cross country, where he set multiple school records.

He set the 1600-meter and cross country records at SSHS, winning multiple regional championship races and earning multiple state appearances in both cross country and track. He was also named Team Captain of the soccer team his senior year and was voted District Defensive MVP.

At SSHS, Northcutt earned 12 varsity letters (cross country, track and soccer all four years). He was a multiple-time district champion in cross country and in the 800-meter, 1600-meter and 3200-meter races in track.

In cross country, he was a regional qualifier all four years and was regional champion his senior year. He qualified for state as a sophomore, junior and senior, and placed sixth his senior season.

His awards include being a three-time SSHS MVP in cross country, a two-time MVP in track and the recipient of the Forrest Gregg MVP Award as a senior.

In addition, Northcutt won the Footlocker National Cross Country race for High School juniors held in North Carolina, and as a senior placed fourth in the Congress Avenue Mile, which hosts the top eight 1600 meter runners from the four regions of Texas

He received a scholarship to Texas A&M University, where he competed on the cross country and track teams and was on the varsity travel team for three years. He was a member of the 2008 NCAA South Central Cross Country Regional Championship team and set new personal records in the 800 meter, the mile, 8,000 meter and 10,000 meter races. Graham has also competed in four marathons.

He graduated from Texas A&M in 2011 with a Bachelor of Science in Human Resource Development and minor in Business and moved to Denver, Colorado, where he met his future wife, Leann Rucker. They were married in March of 2017.

They currently reside in Austin, where Graham works in Human Resources for the Texas Department of Motor Vehicle’s Headquarters and Leann is a nurse anesthetist with the Austin Anesthesiology Group.

They currently don’t have children, but they do have nieces and nephews and a 110-pound German Shepherd named Kojax.

Graham is the son of Eddie and Karen Northcutt and has one sibling, Charles Northcutt.

His presenter will be his high school coach, Andy Holt. 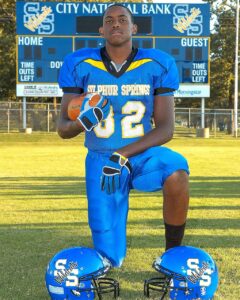 Colton Miles-Nash was one of the stalwarts on the defensive side for the 2008 State Championship Wildcats, and that earned him a Division I scholarship to the University of Arkansas.

His senior year, Miles-Nash had 80 unassisted tackles and 110 total tackles with eight sacks, eight tackles for losses and 23 quarterback hurries as defensive end.

He played in the Offense-Defense All-American Bowl in South Carolina his senior year.

At SSHS, Miles-Nash also played basketball, where he was an All-District selection as a junior and senior, and he was also a track letterman.

Miles-Nash originally wanted to play football for Oklahoma, where his cousin and Hall of Honor inductee, Keenan Clayton, was a senior, but he eventually chose Arkansas. He was a four-year letterman, a two-year starter and had a memorable blocked punt against Ohio State in the Sugar Bowl in 2011. He was also recruited by Auburn, Baylor, Colorado, Colorado State, Texas A&M, Texas Tech and UTEP.

After college, he played semi-pro football with the Nebraska Danger from 2015 to 2018.

He is the son of Biankah Miles and the late Charles Nash. He is married to Yvonna Hines Miles-Nash and has two children, Journee and Courtney Miles-Nash. His siblings are Kris Nash and Charlisa, Angelina and Ashton.

Colton’s award will be presented by his high school coach, Greg Owens.

Contributed by the Wildcat Hall of Honor