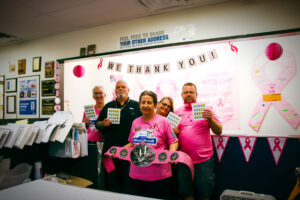 For the fourth year in a row, the Sulphur Springs Post Office is part of a nationwide campaign to raise funds for breast cancer research.

To increase awareness about breast cancer, the United States Postal Service is challenging citizens of Hopkins County to contribute through the purchase of stamps. The stamps, which feature a rainbow watercolor design, cost 75 cents, of which 17 cents goes to breast cancer research.

The stamp price goes to help fund breast cancer research at the National Institute of Health and the Department of Defense’s Medical Research Program, according to USPS.

Since the breast cancer stamp program began in 1998, nearly $90 million has been raised through the sale of the semi-postal stamp, according to the USPS.

For the past several years, Sulphur Springs has been the top seller of the breast cancer awareness stamp.

The stamp was introduced in 1997, and since 2018 Sulphur Springs led the area for all zip codes starting in 754 and 757. They beat out much larger post offices at Tyler and areas of Dallas, according to Martin.

Beginning in 2019, Sulphur Springs employee Anita Riggs has distinguished herself in breast cancer stamp sales as the top seller in the district and region. So far in 2021, according to Martin, Riggs herself has sold more breast cancer stamps than have been sold in the entire state of Hawaii.

In fact, Riggs has a special wrestling-style title belt that is kept in the front display case of the Sulphur Springs station during October for her hard work. Customers may have seen this belt as they enter the lobby.

“I’ll make a strong bet we’re keeping the belt,” Martin laughed. “The challenge has been issued.”

The hard work that has launched the Sulphur Springs station into the lead on breast cancer stamp sales is just one example of how much they care for their community, Martin said.

“Everyone here cares so deeply,” he noted. “It’s absolutely amazing to see. I’ve been in federal employment 30 years. I’ve worked everywhere, and this place is something special.”

For those in extremely rural locations or the elderly in Hopkins County, the post office is often an important connection to the world. Martin says the personal relationships citizens develop with their carriers and front counter workers often begin long-lasting and meaningful friendships.

He says this is why it’s important for those with any kind of cancer– including breast cancer, know that local post office employees support them.

For more information, visit the post office at 320 Church St, Sulphur Springs, TX 75482. Both stamps and stamp books are available for purchase.