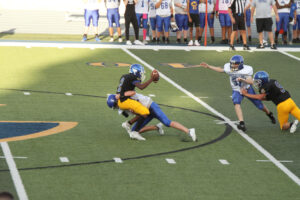 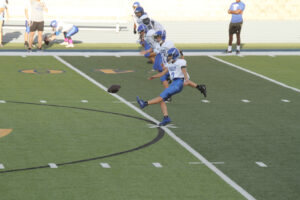 The freshman Wildcat football team traveled to Corsicana to take on the Tigers on their home turf, beating them handily.

The Wildcats started play off with an onside kick that was touched by Corsicana and recovered by  17 of the Wildcats. Laren Vaughn (2) made a great run for the first touchdown of the game. The extra point was short, Wildcats 6-0.

On the next possession faced with third and long Corsicana took a 75 yard run around the right side for a touchdown. The extra kick was good bringing the score Wildcats 6 Corsicana 7.

The next time the Cats had the ball Dedrick Rose-Luke (3) made an impressive run down of 45 yard to take the ball to the 10 yard line. Form the Wildcat formation Larren Vaughn (2) took a direct snap the ball and wove his way into the end zone to put the Wildcats back ahead. Instead of kicking, Larren Vaughn (2) ran the ball in again for a two-point conversion making the score 14-7 Wildcats.

Kaden Mitchell (1) handed off to Dedrick Rose-Luke (3) who made a strong run weaving through the middle of the Corsicana defense for another Wildcat touchdown. Unfortunately the extra point attempted was blocked. This put Wildcats up 20 to 7 over Corsicana.

Skylar Lewis (16) caught an out route and evaded multiple Tiger defenders to fight for the 4th Wildcat touchdown of the night before halftime. The extra point was a nice kick but just wide right, 26-7 Wildcats at the half.

Solid night for the Freshman defense. The young team swarmed all night against a faltering Corsicana squad. Defense lineman Gage Williams (67) had a recovered fumble and recovered blocked punt. The defense held the Tigers scoreless in the second half with multiple played for loss and were constantly disrupting plays in the Corsicana backfield.

The final score of the game came on by Kaden Mitchell (1) in a bootleg run that confused the defense and resulted as a 25 yard touchdown. Unfortunately the extra point was no good.

Very strong 32-7 team win for the Sulphur Springs Freshman. Strong running attack from the offense. Special teams had recovered onside kick and block punt.  The defense held the opponent to just one long run and only 7 points.

The next freshman game will be held on Thursday, October 21 here in Sulphur Springs.