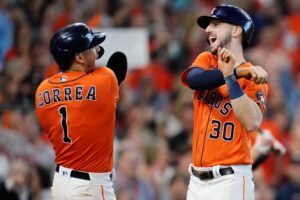 The American League Championship Series will begin on Friday, in which the Houston Astros will be paired up against the Boston Red Sox in a best-of-seven series. This marks the Astros fifth consecutive trip to the ALCS, a feat not seen since the Braves of the nineties.

The Astros got here by going 3 – 1 against a tough White Sox team in the Division Series, trouncing the Southsiders by a score of 10-1 in the final game.

The team’s stable of hitters have been hitting well; Carlos Correa and Jose Altuve had five hits a piece and scored 13 runs between them in the ALDS. As a team the Astros hit an exceptional .288/.371/.432 in the Division Series with four home runs and 31 total runs scored over the four games.

On the pitching side Lance McCullers, Jr. has been remarkable, earning a win in two starts over 10.2 IP and owning a sparkling .84 ERA for the series. The team overall had a 4.63 ERA for the DS.

The Astros are still shrouded in controversy for the sign-stealing scandal they were embroiled in during the 2017 and 2018 seasons, for which they were sanctioned by MLB. This was never more evident than when White Sox starter Carlos Rodon drilled Altuve in the left arm in game four and the entire crowd at Guaranteed Rate Field in Chicago erupted with glee.

Before the 2020 season Red Sox manager Alex Cora was fired by the team for his role in the scandal as bench coach for the Astros. In a twist of fate, he has since been re-hired by the Red Sox and will look to defeat his old team on the way to the World Series.

Game one of the ALCS will air on FOX with first pitch at 7:07. The first two games will be played at Minute Maid Park in Houston.