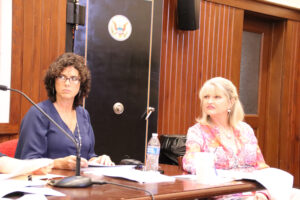 Sulphur Springs city secretary Gale Roberts will be retiring this year, per an affirmation of her decision by the city council on Tuesday evening.

After an executive session “regarding the employment of the city secretary” from 6:30 pm. To 6:55 p.m. on Oct. 2, the council unanimously approved Roberts’ retirement beginning December 22, 2021.

Former police records clerk Natalie Darrow will fill the role, per the council.

Roberts began her career with the city of Sulphur Springs on September 20, 1999 as the administrative assistant to the community development director. Upon the retirement of city secretary Sharon Ricketson, Robertson moved into the role of city secretary, a position she has held for the last 16 years.

From 2016 to 2020, Roberts trained in an intensive, four-year municipal law program from the Texas Municipal League, receiving her certification as a Texas Municipal Clerk. She also battled breast cancer during this time.

She was awarded her degree on Jan. 30, 2020, and in March, received commendations and a raise from the city, with Mayor John Sellers calling her “the lady who actually runs the city.”