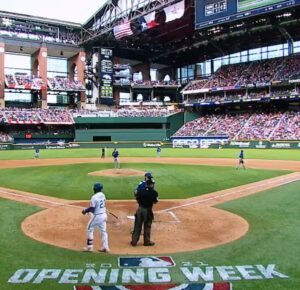 The 2021 MLB regular season is over. The Texas Rangers finished the season with a fitting 6-0 loss to the mediocre Cleveland Indians on Sunday to secure last place in the West and a 60 – 102 record. That is a .370 win percentage, the second worst in the AL, beaten out by only the hapless Baltimore Orioles.

Texas’ winning percentage last year was slightly lower (.367) than this year, but that season was shortened due to COVID. This season marks a low in futility that the team had not reached since 1973, when they were a notoriously dysfunctional fledgling operation, which was the last time they accrued 100+ losses (57-105).

By the end of the season the team only had two hitters with an OPS+ (adjusted on base + slugging, where 100 is league average) above 100, Adolis Garcia (101) and Nathanial Lowe (113). It is worth noting that fan favorite Joey Gallo, who was traded from the team to the Yankees in July, had a 139 while in Texas but posted a 122 for the season after failing to have the same production in New York.

As a team, the Rangers slashed .232./.294./.375. Out of the 30 MLB teams this season, that ranks them second worst in average, worst in on base percentage, and third worst in slugging. It is no surprise that the team ranks dead last in OPS (on base + slugging) then, with a paltry .670.

While it was an incredibly disappointing season for the ballclub in Arlington, there are a few things to be optimistic about. The trades of Gallo, Gibson, and Ian Kennedy bolstered the team’s farm system with seven new prospects, and the acquisition of 21-year-old stud RHP Jack Leiter via the draft helped move the needle even more, bumping up Texas’ farm system from being ranked 21st at the beginning of the season to 11th by the end of it. Leiter, Josh Jung (3B), Cole Winn (RHP), Sam Huff (C), Yerry Rodriguez (RHP), Luisangel Acuna (SS), and Justin Foscue (2B) are all high-ranking prospects worth keeping an eye on.

Equally as exciting, as has been previously stated on Front Porch News, Adolis Garcia stands a very good chance of winning the American League Rookie of the Year for his stellar defense (16 outfield assists), big time power (31 home runs) and good speed (16 SB). He is old for a rookie (28), but will not become a free agent until 2025, giving the Rangers a chance to get a lot of his prime years. If Garcia can get on base at a higher clip, he will be a legitimate MVP vote getter at some point in his career.

Isiah Kiner-Falefa continued his streak of excellent defensive play this year and has the possibility of adding a Gold Glove for short stop to sit on his mantle next to the one he won last year at third base. He was also valuable at the plate, hitting .271 and was very durable playing in 158 games, the most for the Rangers this season.

Finally, the best hitter on the team this year was first baseman Nathaniel Lowe. Lowe had a .772 OPS to lead the team, mostly due to his .357 OBP. He is only 25, so he has a chance to really find his power swing and bump his slugging percentage up a bit from the pedestrian .415 that it was this year. He is an exciting player that was acquired from the Rays prior to the season via trade and will hopefully blossom into an all-star talent.

Chamber Connection for 10/6 by Butch Burney