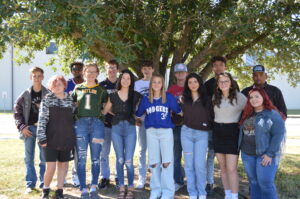 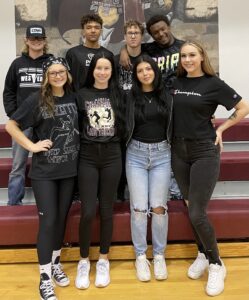 Justin Demidio- 17, son of Sheila and Jason Demidio, has played football, baseball, basketball and ran track all four years at Cumby High. He is undecided where he would like to go to college, but in the future would like to make money.

Azlyn Hornsby– 18, daughter of Holley and Gavin Hornsby, is part of varsity sports including volleyball, softball and track as well as One-Act Play. In the future she will attend Lamar Junior College to play softball and one day hopes to be a teacher and a coach.

Savannah Kurn– 17, daughter of Mika Robertson and Rachel Kurn. Her extracurricular activities include four years of volleyball and softball, four years as a TAFE Officer, two years of track and basketball and her position as captain of the cheer team. After graduation she would like to attend Texas Tech and one day hopes to become a teacher and coach.

Dayli Sims– 17, daughter of Mercy and Ron Sims, is part of volleyball, cross country, track, softball, FFA and Beta. After graduation she hopes to attend Texas A&M University- Commerce and major in nursing, with the goal to one day become a nurse anesthetist or radiologist.

Isabela Vizcaya– 17, daughter of Lisa Marin and Juvenal Vizcaya is involved in Beta, SHAAC, and various athletic activities. After graduation she would like to attend UNT or Texas State to get a degree in nursing and one day become a traveling nurse.

Jaden Basham– 17, has parents Kendra and Oshay Alex and Denese and Josh Basham. He is involved in football, baseball, basketball and track, and would like to go to Oklahoma State after graduation to pursue a degree in business.

Gemmarray Weatherall– 18, is the son of Krystal and Gerald Weatherall. He is on the football team and is the senior class vice president. He would like to attend Oklahoma State, and says he would like to be a zookeeper.

Logan Miller– 17, is the son of Kimberley and Jerry Miller. He is part of FFA and the Ag Mech team, and took first place at the San Angelo Stock Show and Rodeo two years running in addition to winning showmanship in Hopkins County. He would like to attend Texas State Technical College to pursue a career in welding, perhaps to service wind turbines.

How to purchase the best hay by Mario Villarino