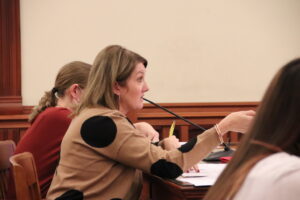 The Hopkins County Commissioners Court held a special meeting on the afternoon of October 5 to discuss the American Rescue Plan Act, among other items of business.

After opening the court at 1:06 p.m., although some citizens were in attendance in the gallery.

County judge Robert Newsom read aloud for the court a list of figures the county intended to allocate from funds granted to them from the American Rescue Plan Act of 2020. These included:

“This is American Rescue money, right over $7 million, coming right into Hopkins County,” Newsom said. “While the allocations will be set aside today, there will be some give-and-take in the figures… the expenditures do have to be Covid-19 related.”

“They’re very strict in how we use those funds,” Pct. I Commissioner Mickey Barker agreed.

Trustie housing qualifies for public health of the general inmate population, Aulsbrook noted. Newsom stated trusties complete work within the school, city and county and funds may be used to house them separately to lower the risk of Covid-19 transmission. Aulsbrook agreed.

Road and bridge funds for general economic development and construction are ineligible unless they are funded through a county’s loss-revenue replacement balance.

“It’s particularly for the purchase of capital assets, not for going on the roads,” Newsom stated, and Aulsbrook agreed.

The court unanimously approved the allocations.

Aulsbrook then presented on line item transfers. Precincts 2 and 4 sought to purchase one each Holt Cat M314 Excavators. Each costs $305,000, and each precinct would use allocated American Rescue Plan Act funds just allocated.

“It’s not an excavator, it’s an excavator on top of a trailer,” Pct. 4 Commissioner Greg Anglin noted. “I’ve got at least four jobs right now I can think of that this machine will do.”

Pct. 2 Commissioner Joe Price stated he was in great need of the M314, as his previous excavator had recently burned beyond useability.

Price and Anglin stated they recently traveled to Hunt County to examine similar equipment, and were impressed.

“I think this will be a more efficient machine for brush cutting, and to serve different purposes” Anglin remarked.

“We can actually clean the ditches, try something new for once,” Price said.

The court unanimously approved the request.

The court accepted a line item transfer in the amount of $7766.56 from the Texas Association of Counties for insurance.

The court accepted a line item transfer in the amount of $2266.38 from the Texas Association of Counties for damage they did to a truck.

The court accepted a line item transfer from the jail commissary for $39,000, which was moved to the Sheriff’s Office truck fund.

The court accepted a line item transfer for $2 million from the American Rescue Plan Act, to be allocated as discussed previously.

The court had no personnel changes.

The court had no disposal of assets.

The court had no proclamations.

Aulsbrook stated not all monies can be used immediately, as not all bids are back on projects. However, commissioners felt positively about allocating the funds ahead of time.

County fire marshal Andy Endsley commented on the need to replace the Martin Springs communication tower, which is 55 years old, he stated.

“When we get wind or anything like that, it could come down,” Endsley said. “That would be the end of that, and that would cripple our communications.”

Barker stated Hopkins was the first county within NETEX to allocate ARPA funds to the rail line and stated he “will encourage other counties to do the same.”

“We want to do something ten to fifteen years from now that we can look at that’s still operating well,” Newsom said.