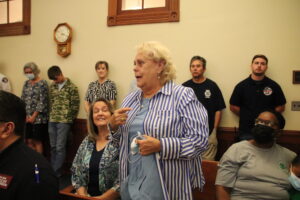 Dike citizens clashed with Engie public relations regarding basic facts about solar panels, among other items of business at the regular September 27 commissioners court.

Several members of the Dike community were present to give their thoughts on proposed solar at commissioners court on Monday morning. The court was opened to citizen comments at 9:03 a.m.

Citizen Michele Barnes opened comments by stating that if current residents did not believe solar produced disruptive noise, it was only because the Dike installation had not yet been turned on.

“They haven’t even hooked up and started the solar power plant, so you can’t use it as an example,” she insisted.

Engie Solar public relations specialist Bill Pentak, who also appeared in court, argued with Barnes on the factual basis of her claims.

Among Pentak’s assertions are that active solar farms, such as the Impact Solar site in Deport, Lamar County, do not make noise.

“They have no moving parts, they only have a motor,” he said.

Barnes stated her main concern over the scope of 10,000 total acres approved in Hopkins for solar installations was deforestation.

“What is the benefit of going green if you tear down trees, remove vegetation, and put in cement structures?” she asked.

Pentak insisted that retention ponds created at the Dike site “would not be cement” but rather be “vegetative retention ponds put there as a safety measure to make sure there’s not going to be any runoff issues.”

“It’s not going to hurt the birds, the butterflies, the bees,” Pentak said.

She stated she believed this is due to a lack of regulations at the local, state and national levels. “‘Just throw some money at it and it’ll all go away’’ is their philosophy.”

Citizen Frankie Miller spoke next, stating she was “raised in a cotton field and a corn field there [Dike],” and that “no one wants to look out at 1800 acres of solar panels.”

“Don’t sit here and tell me– tell us– that we’re going to be inundated with solar panels,” she said.

“We understand that people are disturbed and concerned,” Pentak said, but continued on to tell Miller it would be hundreds– not thousands– of acres from which Engie planned to remove trees.

Miller and citizen Linda Starr both expressed concerns regarding how much heat solar panels produce, which Pentak claimed was none or negligible. Miller and Starr also found it hard to believe an installation of such a magnitude would not adversely impact wildlife, despite Pentak’s claims solar panels are endorsed by the Audobon Society and an entity he referred to as the ‘American Beehive Association.’

“They’re all made overseas,” Starr said. “Why can’t we have something made in America?”

Starr stated she believed that “America is up for sale, and that’s what Engie is doing, taking our land.”

With no further discussion, the public forum was closed at 9:19 a.m.

Teer to seek seat as justice again in 2022