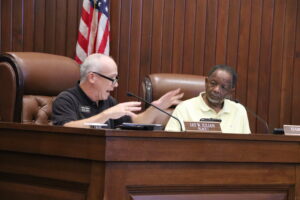 The Sulphur Springs city council raised the street maintenance fee to $10, among other items of business at a special meeting on the evening of Sept. 21.

After opening the meeting at 7:28 p.m., the council turned their attention to the city’s fee schedule, particularly the street maintenance fee.

No citizens were present to give comments.

City council member Jay Julian began comments by stating he believed Hopkins County should contribute to maintenance costs. Julian’s research through the Texas Department of Transportation, he said, found approximately 44,000 registered vehicles in Hopkins County “that must sometimes be traveling our city streets.”

“Everyone comes to town to buy something and we don’t get anything on that,” Julian said. “I’m looking for a more aggregate way to share the financial burden.”

City manager Marc Maxwell stated he “had some reservations [he] wasn’t ready to express publicly,” and stated he needed time to consider Julian’s points.

Mayor John Sellers expressed he found it “disappointing, personally,” that no citizens were present in the gallery to comment on the fee.

“I did notice on the social media there’s still a lot that people don’t understand,” Sellers noted. “It’s muddled about what the street maintenance fee allows us to do above the normal budget.”

Sellers called for the city to produce an easy-to-access fact sheet for citizens regarding the program, both as a handout and on the city website.

“We just have to be so transparent about this… I want it where sometimes it’s too much,” he said. “Our case needs to be proven of what we’re doing.”

With no further discussion, the council just voted 4-2 to approve charging $10 monthly for the Street Improvement Fee. Mayor Sellers and Rev. Nash voted against the measure. Council member Freddie Taylor was not present to vote.

“I respect, I understand, but due to what’s going on in the world, there are some people who are truly struggling,” Sellers said regarding his vote.

Council member Gary Spraggins also introduced the chamber to his mother-in-law, who was in the audience that night.

With no further business, the meeting was adjourned at 7:48 p.m.