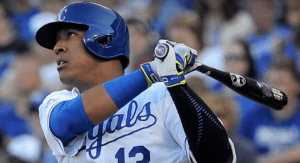 On Monday, Kansas City Royal Salvador Perez did something that no other catcher has ever done before; he hit his 46th home run of the season. Perez’s dinger, a no-doubter off Cleveland’s Triston McKenzie, put him one ahead of Hall of Famer Johnny Bench’s previous single-season record for a catcher. Bench accomplished his feat in 1970 on his way to winning the NL MVP during the earliest days of the Big Red Machine.

The home run also ties Perez with Vladimir Guerrero, Jr. for the MLB lead. Perez’s previous season high for home runs was 27, which he did in both 2017 and 2018, before suffering an elbow injury that sidelined him for the entire 2019 season. He was excellent in the COVID-shortened 2020 campaign and has continued to be so this year, which is statistically his best.

The 31-year-old also now has a commanding lead in the RBI column over Guerrero, all but assuring that Vlad will not win the triple crown this year. Perez has driven in 115 runs, ten better than Vlad, giving him the most in the majors this year. The race for the home run and RBI crowns between the two players has been an unexpected, but exciting one.