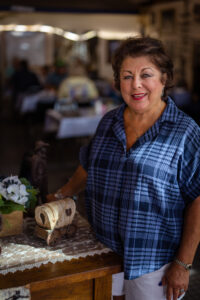 In honor of Pioneer Cafe’s twelfth anniversary, owner Barbara Palmer is giving away free dessert. But it’s not just any dessert– like many dishes at the cafe, it’s a secret recipe and Hopkins County favorite which has historical value as it has seen very few modifications in decades.

The dessert, bread pudding with butter bourbon sauce, is available on September 22 from noon to 2 p.m. for every lunch customer.

While Palmer can’t reveal its’ ingredients or how it’s prepared, she does say her specific recipe is over 50 years old and hails from New Orleans, where she first learned it.

According to the Food Network, the dish, also called New Orleans bread pudding, is often eaten during Mardi Gras. There is much disagreement from die hard fans of the dish what type of bread, sugar and even what type of whiskey should be used as main ingredients. Folks are even more heated over whether it should have raisins or not.

Palmer has been serving her dessert, Pioneer Cafe’s signature sweet, since 2009 when she opened her doors. How the establishment came to be was a fortuitous coincidence– or maybe a deliberate blessing.

“There was an ad in the local newspaper one weekend advertising a restaurant for lease,” she said. “I asked my husband if he wanted to go look at it… We made a deal to lease that day.” 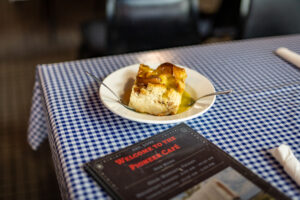 On Sept. 22, 2009, Palmer retired from her 38-year career with the federal government and she and her husband became full-time restaurateurs. She continued even after the death of her husband in September 2012, although she misses him dearly. She is still reminded of him everyday, as the walls of the cafe are filled with many memorabilia that used to belong to him.

The theme of memorabilia snowballed, and now customers come from far and wide to marvel at the themes– cowboy, “law dog,” Alamo, and more. Even a mounted pronghorn antelope bagged by Barbara’s husband Rickie greets customers as they walk in.

For Palmer, the cafe should feel like a place for the community to gather. That’s why she says she wants to serve an inviting space and comfort food.

“It is our pleasure to serve you,” she said.

Chamber Connection for 9/14 by Butch Burney