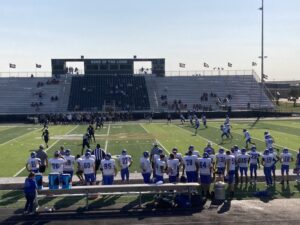 The Sulphur Springs Wildcat freshman football team completed their first win against Kaufman Thursday night. With a 36-14 victory in Kaufman.

DeEric Benitez (21) made the first, and early touchdown of the game. Kaden Mitchell (1) had a great pass to aid in getting the score. With the two point conversion the Wildcats are up by 8.

The Wildcats made a great onside kick with a full recovery by Wyatt Watson (23) for the turnover. Kaden Mitchel looked for the pass but saw the open line to run in the ball for the second touchdown. The extra kick was blocked.

Kaufman put up their first points late into the third quarter making the score 7 to 14. A hand off to Larren Vaughn (2) made for a Wildcat touchdown bringing the score with the two point conversion 22 to 7.

The play continues with another onside kick, that is deflected off a Kaufman player and recovered by Billy Boughton (27) for a Wildcat possession. This led to another touchdown by Nathan Andrews (34). Bringing the score to 28-7.

Early in the fourth quarter Kaufman makes a deep pass for a touchdown. The score is now 28-14 Wildcats.

Not to be left behind, Skylar Lewis (16) went deep for a throw from Kaden Mitchel to collect another touchdown for the Wildcats. With the two point conversion, Wildcats finished 36-14.