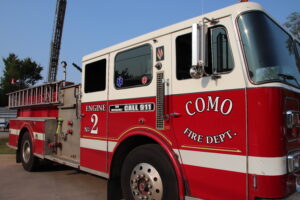 A proud participant of Hopkins County’s commemoration of the 20th anniversary of the World Trade Center bombing was a piece of equipment that was actually there– Como Volunteer Fire Department’s Engine 2.

Purchased in 2019 but only recently rehomed to Hopkins, Como’s Engine 2 was previously known as Engine 33 of Larchmont, New York. The 1993 Seagrave Pumper was toned out on the morning of September 11, 2001, when the all-call went out and reached the sleepy Long Island suburb that would not normally respond to New York City calls.

Like Sulphur Springs, Larchmont is made up of both career and volunteer fire fighters, according to the city. Most years, the same as Hopkins, they host an event to commemorate 9/11, although sadly their loss hits very close to home. The town of Larchmont lost 12 citizens that day. This year, the crew was unable to mark the day, as they are spending all their time helping citizens after Hurricane Ida.

Como is carrying on the remembrance in their stead. Scattered all over the engine are tributes to its past. The front windshield still carries its number 33, the same as the day it responded in downtown Manhattan. The Como VFD has also affixed a historical plaque that denotes that the engine responded to the World Trade Center.

“We’re very proud of it,” said C. Meeks, Como Chief. “It works great, and we’ve used it to put out a lot of fires. We’re glad it’s getting used for what it was meant for.”

Rangers to trade Calhoun to Giants, receive Duggar in return