Rangers ripe for Hall of Fame by Jordan Miesse 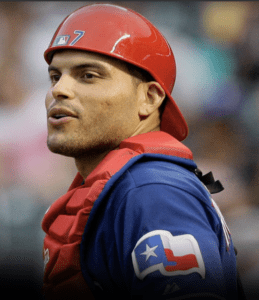 The induction of Derek Jeter, Larry Walker, Ted Simmons, and long-time MLBPA Executive Director Marvin Miller yesterday into the National Baseball Hall of Fame calls to mind the myriad other great players that have been gifted us by the baseball gods.

While the Texas Rangers cap is only featured on one plaque in the Hall of Fame, there are eight players enshrined in those halls that played for Texas. Let’s critically at those Hall-of-Famers from a Ranger fan perspective. (For those wondering, Adrian Beltre is eligible for induction in 2024.)

Harold Baines – inducted in 2019 – Objectively one of the more middling players to be inducted, Baines was elected via the veteran’s committee two years ago to the chagrin of many of the more stat savvy baseball writers. Baines was traded to the Rangers from the White Sox in the middle of the 1989 season in a deal that sent Sammy Sosa, Scott Fletcher, and Wilson Alvarez to the South Side. Baines hit well in Texas, putting up .290/.377/.449 the following year, before being traded to Oakland. Sammy Sosa would rejoin the Rangers to finish his career in 2007.

Vladimir Guerrero – inducted in 2018 – After dominating the Rangers while playing for years with the division rival Angels to the tune of .395/.461/.661 against Ranger pitching, in the 2009 offseason GM Jon Daniels wisely signed Vlad to a one-year deal. In his one season with Texas, Guerrero hit 29 homers and drove in 115 runs, earning himself a Silver Slugger at DH while helping the team score its first league championship. Guerrero finished up his career the next year with Baltimore having collected 449 home runs and a owning a career average of .318. He was also widely known for having Roberto Clemente’s arm in right and Beltre’s penchant for hitting bad balls on the screws.

Ivan Rodriguez – inducted in 2017 – The only player in Cooperstown to be inducted as a Texas Ranger, Ivan “Pudge” Rodriguez was an institution in Arlington. Pudge is generally considered the greatest defensive catcher of all time. He was called up to Texas at age 19 from AA on the night he was supposed to get married, forcing the couple to postpone. They are still married, and he never went back down to the minors, so it seems to have all worked out. Pudge was the backstop in Texas for the first 12 of his 21 seasons, earning 10 of his record 13 Gold Gloves, 10 of his 14 all star appearances, and an MVP with the team. He would eventually make his way back to the team for a forgettable 28 game stretch in 2009 before retiring with the Washington Nationals.

Bert Blyleven – inducted in 2011 -The Dutch-born Blyleven started his career in Minnesota but was traded to Texas during the 1976 season. He was excellent in 1977 with the club, posting a 2.72 ERA and leading the league in WHIP. Blyleven’s time in Texas was short-lived, however, as he was traded to the Pirates for Jon Matlack and Al Oliver. The big righty would go on to finish his career with 3,701 strikeouts, thanks in large part to his wipe out curve.

Rich Gossage – inducted in 2008 – One of only seven relief pitchers in the Hall, Rich “Goose” Gossage is known for his mustache, his fastball, his crotchety attitude, and for being the prototype for the modern day closer. Gossage did not come to Texas until was 39-years old in 1991 and did not pitch in the closer role. In fact, he only notched one save that year with Texas, but it happened to be his 308th to secure Nolan Ryan’s 308th win. Gossage was only with the club for that one season, pitching three more with the A’s and Mariners before retiring in 1994.

Nolan Ryan – inducted in 1999 – The native Texan began his dominant Major League career with the New York Mets in 1966 and did not make his way to Arlington until 1989 where, at age 42, he struck out 301 batters. His career in Texas was relatively short when compared to the breadth of his full career, but in his five seasons with the club Ryan struck out 939 batters, won 51 ballgames, beat up Robin Ventura, and added two more no-hitters to his impressive résumé. The Ryan Express was overpowering. He finished his career with 5,714 strikeouts, a record that will never be touched and is 839 k’s more than the next player on the list.

Ferguson Jenkins – inducted in 1991 – The first, and, until Larry Walker, only, Canadian to be elected, Fergie began his career with the Phillies and the Chicago Cubs. During a dominant three year stretch with the Cubbies, Fergie was also moonlighting with the Harlem Globetrotters in the offseason. After his time in Chicago, he had two stints with the Texas Rangers. He pitched for the team from 1974-1975 and then again from 1978 – 1981. The first three years in Texas were particularly good, he led the league in wins with 25 in 1974. In his six seasons with club, Jenkins racked up an impressive 895 strikeouts and 93 wins. He would hang up his spikes in 1983 having compiled 3,192 strikeouts and 284 wins.

Gaylord Perry – inducted in 1991 – At the age of 36 Perry was traded to the Rangers during the 1975 season, coming off a 20-win season the year before with Cleveland. Apparently, he and manager Frank Robinson did not get along. Known for his spitball, Perry went on to win 15 games for Texas in each of the next two seasons with he and Blyleven anchoring the staff. Perry would come back and pitch well again for Texas in 24 starts in 1980. He finished his career with 314 wins and 3,534 strikeouts.