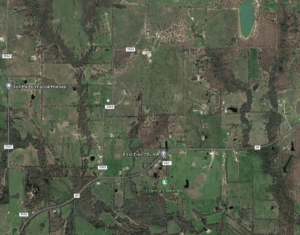 Five Arkansas men led Hopkins County Sheriff’s Deputies on an hours-long manhunt in the Dike community late Sunday night, which ended in their capture in the early morning hours of Labor Day.

According to a statement by HCSO, Cumby police attempted to perform a stop on a dark gray Dodge Charger, which fled the traffic stop for an unknown reason.

The vehicle became inoperable at County Road 3563 and the suspects fled the area on foot, HCSO said.

For nearly 8 hours, the men evaded capture in the Dike community.

Dike residents posted on social media they were “locked and loaded” and “ready to shoot” if they saw the fugitives.

At 8:43 p.m., HCSO updated they had captured three subjects, but were still searching for the remaining two.

At 1:11 a.m., HCSO believed they had exhausted their search capabilities.

“After interviewing the suspects in custody we believe there are two suspects at large,” HCSO stated. “It is very possible they could have been picked up. Deputies are still in the area and citizens should remain aware throughout the night.”

However, only a short time later, HCSO apprehended the two remaining fugitives.

“All suspects are now in custody. The other two were located,” HCSO updated at approximately 2 a.m.

Book-in and charges for the five have not yet been released by HCSO as of 8 a.m. on Sept. 6.