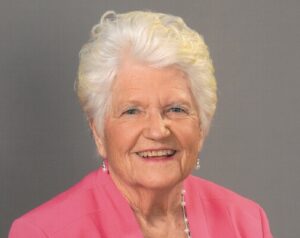 Martha Ann Willeford Burns was a loving and compassionate wife, mother, grandmother, sister, and friend. She left her earthly home on September 1, 2021 at the age of 83.

She was born in Rowlett, Texas on February 5, 1938 to Samuel Willeford and Wilma Jones Willeford of Rose Hill.  On November 12, 1969, she married Robert L. Burns.

Martha was a hard-working woman who loved taking care of her family when she wasn’t busy working in their family business, Burns and Son Plant Farm, in Emory, Texas.  For 36 years, she helped with growing and tending to plants but most of her time was spent on the road selling and delivering vegetable and bedding plants to plant nurseries, feed stores, and Austin College.  Driving approximately 250 miles a day, she had many customers who became friends.  She always took time to talk to them and learn more about them and their families.

Martha was a devout Christian and very faithful to her church.  She was a member of Emory Baptist Church and belonged to the Ruth Sunday school class.  She enjoyed participating in TEL and Senior game days when she was able to attend.  Above all, she loved the Lord and had a desire for everyone to know Him personally.

She was also survived by brothers and sisters: