Home » No. 5 Commerce to take on No. 12 Pueblo
FeaturedLocal News 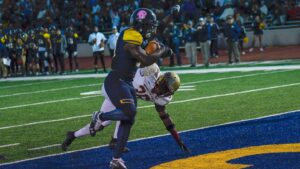 The long drought is over. The No. 5 ranked Texas A&M University-Commerce football team takes on No. 12 ranked Colorado State-Pueblo on Thursday night at Neta and Eddie DeRose Thunderbowl for the first game in the 2021 season.

A&M-Commerce is ranked No. 8 in the AFCA Coaches Poll, No. 5 in the D2Football.com Media Poll and No. 7 in the Lindy’s preseason preview. Colorado State- Pueblo is ranked No. 12 in all three rankings.

The Lions look for their first win over the Thunderwolves, who are 2-0 in the series. Pueblo downed A&M-Commerce by scores of 24-17 and 23-13 in 2019 and 2018, respectively. The Lions are 2-2 all-time against RMAC schools. The Thunderwolves have been the lower ranked team in both prior meetings and are again on Thursday. This is the second-straight time the teams are meeting in Pueblo.

Walmart to close for COVID-19 precautions

Slight chance of rain this weekend