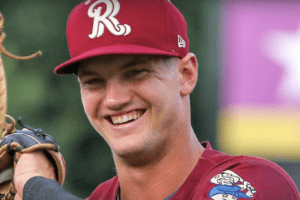 Baseball has a reputation for being stodgy, boring, and full of unwritten rules that are enforced by self-imposed arbiters of the game. These old paradigms are ripe to be excised in order to grow the sport with a younger demographic. Luckily, there are a slew of exceptional young players that play with unabashed bravado that have blasted their way into the upper ranks of The Show.

Big campaigns such as 2019’s “Let the kids play” from MLB have sought to correct the trend, and regardless of their national popularity, these kids can play. And they have proven that they can be top tier competitors while bringing some much-needed swagger and levity to the game.

How good is this new crop of young superstars? A look at the individual player statistical leaderboards reveals something that would have been surprising a decade ago; the best players in baseball are all very young. Three of the top five players on the On Base Percentage + Slugging Percentage (OPS) leaderboard are 22 years old. The average age of a player on the top ten OPS board right now is two and a half years younger than it was in 2011. Here are a few other names one should know:

Fernando Tatis, Jr. (22): Leading the charge of young superstars is Fernando Tatis, Jr. Some readers may remember his father from his time with the Rangers in the late 1990s. The younger Tatis is as flashy of a player as they come, playing the game with unbridled athleticism and reckless abandon. He makes insane plays at his shortstop position for the Padres, shows great speed and agility on the basepath, and hits for power and average. He’s currently hitting .284 with an NL leading 36 homers. Plus he already has an all-time epic batflip to his credit. Tatis is ubiquitous in San Diego, but, as with most baseball stars, his fame is relegated to his local market.

Juan Soto (22): The consistently excellent outfielder for the Washington Nationals is now playing in his fourth season. Soto has already racked up 89 home runs to go along with his impressive .296/.423/.544 career line. His .442 On Base Percentage (OBP) for this season is over 30 points higher than anyone else’s in baseball.

Vladimir Guerrero, Jr. (22): The Toronto Blue Jays first baseman has found his swing this year and has blossomed into the best hitter in baseball. The son of a Hall of Famer (and former Ranger), Vladdy’s name is strewn across all the major offensive leaderboards. In all of baseball, he is tied for the second most home runs this year (38), fourth in average (.313), third in RBI (95) second in hits (150), and leads his league with a .407 OBP. He also became the youngest All Star Game MVP) ever this year.

Bo Bichette (23): Another of the “Baby Jays” in Toronto, Bo is the son of former All-Star Dante Bichette, and has been a very good bat in their lineup since his debut. In his third season now, he is a career .294 hitter that has shown some pop, putting 20 balls into the seats so far this season.

Ronald Acuna, Jr. (23): The currently injured, but bombastic speed/power combo outfielder for the Braves might have the most upside of anyone on this list. In 2019, Acuna became the latest player in baseball’s vaunted 30-30 club when he ended the season with 41 home runs and 37 steals, making him the second youngest person to ever do so. The youngest having been Mike Trout in 2012.

Wander Franco (21): Franco is the former number one prospect who made his debut playing shortstop for the Tampa Bay Rays this June and we are currently seeing his breakout unfold. The rookie currently owns an incredible 30-game on base streak and seems to be getting better daily. He is an electric five-tool player that should be a star for years to come.

Leody Taveras (22) – Leody played 33 games for Texas in 2020 and finished with a .227 average and 4 home runs. This year, however, has been an abject failure with the outfielder hitting a dismal .062 with no home runs. ESPN’s Keith Laws has ranked Taveras as high as 62nd on his prospect list in 2019. He clearly grades out highly on speed and defense, but the bat has yet to catch up with Major League pitching. His youth is the redeeming factor here, he still has plenty of time to figure it out at the big league level.

Jack Leiter (21) – Another son of a Major Leaguer, Jack Leiter made headlines when he signed with Texas in July as the number 2 overall pick with a $7.9M signing bonus. While he has yet to throw a pitch in professional baseball, Leiter went 11-4 last year with Vanderbilt with a 2.13 ERA. He struck out 179 batters, averaging 14.6 strikeouts per nine innings. Leiter throws a plus fastball (up to 99MPH) as well as a good curve, slider, and changeup.

Josh Jung (23) – While he has yet to play in the Majors, Jung was probably the best position player to ever play at Texas Tech. On the 20-80 grade scale, his hit tool grades out as a 60 and his power a 50. Jung is the second ranked prospect in the farm system, directly below Leiter. He spent most of 2021 at AA Frisco playing third base and hitting a respectable .308/.366/.544.

With 32 games left the 2021 baseball season is almost over, but for Rangers fans the season has been over for a while. For that downtrodden lot, it may be best to look toward the future and see what might be. The Rangers are clearly lacking in the young talent department on the active roster, but they do have some solid projectable young players.

Overall, the future is bright for Major League Baseball. It can only bode well for the game that the best players in the league are the youngest players in the league. Opportunities abound for them to develop phenomenal careers, break records, and have fun. There are no unwritten rules or old curmudgeons are going to stop this group of kids from playing.