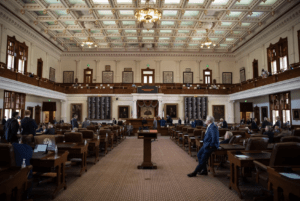 The Texas House/ Eddie Gaspar for the Texas Tribune

After months of drama and political resistance, the curtain has lowered on Democratic attempts to stave off a far-reaching rewrite of the state’s voting laws coveted by Republicans seeking to retain their hold on power in a changing Texas.

One week after finally regaining enough members to conduct business, the Texas House slogged through a 12-hour floor debate Thursday before signing off on a slightly revised version of the Republican legislation that first prompted Democrats to stage a nearly six-week absence from the Capitol. The late-night 79-37 initial vote on Senate Bill 1 moved the state closer to enacting new voting restrictions, including limits on early voting hours and other measures opponents say will raise new barriers for marginalized voters, especially voters of color, who tend to vote Democratic, and those with disabilities.

The House returned Friday to give the bill final approval, 80-41, leaving the House and Senate to resolve their differences before the legislation heads to Gov. Greg Abbott.

“You largely did what you wanted in this bill. You kept changing the bill in the dark, and you backed off agreements we had from time to time that you made with some of us,” state Rep. Senfronia Thompson, D-Houston, told the chamber’s Republicans before the Friday vote. “But make no mistake this is your bill, your idea, and you will be responsible for the consequences.”

Unlike in the spring regular legislative session, the two chambers are much more aligned in their proposals, with the House legislation embracing proposed restrictions it had not included in its previous version of the bill. On Thursday, it further amended various sections of the bill to more closely match the Senate’s version.

Republicans have pitched the legislation as a benign effort to secure elections from fraud, though they have been unable to find significant evidence of it, and to standardize election processes across the state, pressing forward despite a chorus of opposition from Democrats, civil rights groups, voting rights organizers and advocates for people with disabilities.

“The point that I make to you today is that Texas has consistently reviewed its election law policy over time, making changes and updates as needed,” state Rep.Andrew Murr, the Junction Republican who authored the legislation, said at the start of the House’s debate Thursday. “SB 1 continues this process.”

The partisan tensions underscoring the ongoing fight were perhaps best illustrated by lawmakers’ debate over how the bill takes aim at diverse, Democratic Harris County, the state’s most populous, where officials instituted a series of voting initiatives last year meant to widen access to the ballot. That included creating overnight early voting to accommodate voters for whom regular hours don’t work and drive-thru voting that was used by 1 in 10 of those who voted early in person in the 2020 election.

Republican efforts to pull back on those voting options have been decried by Democrats and voting rights advocates as voter suppression targeting voters of color, who county officials have said disproportionately used those methods.

Seeking to head off heated discussions about discrimination, House Speaker Dade Phelan made an out-of-the-ordinary request to lawmakers at the start of their debate Thursday, urging them to avoid using the word “racism.”

His directive instead set up a tense exchange when Democrats speaking against the legislation invoked the Legislature’s recent history of intentionally discriminating against voters of color.

“I am convinced that because our elections were safe, secure and successful that we are not here really to deal with what I termed the pretext of the policy goals — incidents of fraud or likelihood of fraud,” said state Rep. Rafael Anchía, D-Dallas.

Anchía listed off past federal court rulings that found lawmakers engaged in intentional discrimination when they drew up a strict voter ID law that disproportionately burdened Hispanic and Black voters and devised political maps the courts found illegally undermined the strength of their votes. That, Anchía argued, was the “backdrop” against which Republicans were pushing for this legislation.

“I know people bristle at certain terms that are used, so I’ll just say [the Legislature has] been intentionally discriminatory,” Anchía said.

Shortly after, state Rep. Gina Hinojosa, D-Austin, approached the chamber’s back microphone to pose a question to Anchía: “Intentional discrimination against people of a certain race — is that racism?”

Her query prompted gasps and groans among other members and an admonition from Phelan, who interrupted the exchange.

“We can talk about racial impacts of this legislation without accusing members of this body of being racist,” Phelan said.

“Respectfully, I’m not accusing members of this body,” Hinojosa replied.

Defending the ban on drive-thru voting, Murr indicated moving voting outside of the polling place opens up what is supposed to be a private and secure process. Upon Democratic questioning, though, he indicated he was unaware of any instances of fraud or in which a voter felt their privacy was undermined.

Aside from Phelan’s unusual request, Thursday marked a return to familiarity in the chamber, which stood at a standstill for nearly six weeks after Democrats decamped to Washington, D.C., to protest the bill and lobby for congressional action on federal legislation that would have preempted it.

They were always going to be outnumbered back at the state Capitol, though. And with Abbott vowing to continue calling lawmakers back for special legislative sessions until the Legislature passed the new restrictions, Democrats were destined to face a losing vote.

On Thursday, Democrats lined up to speak against the bill and question Murr on whether he looked into the possibility of disparate racial impact from the proposals. Over 12 hours, the Democrats offered more than three dozen amendments — trying to scrap portions of the bill, establish automatic voter registration and require a state study on the impact of voting law changes to different demographic groups, among several others — that were pushed to a pile of failed long-shot proposals.

As she braced for her amendment calling for the study to go down on a party-line vote, state Rep. Toni Rose, D-Dallas, lambasted Republicans for their unwillingness to consider Democratic proposals, pointing to Murr’s previous comments that he would reject amendments while the legislation was considered in committee in favor of floor debate.

“It’s so disingenuous to me for you to make those comments [when] you have no intention to work with your colleagues,” Rose said. “And then you wonder why someone takes the position that they take.”

During his initial presentation on the legislation, Murr defended the bill by noting that it incorporated proposals championed by Democrats, including a new correction process for mail-in ballots.

“It contains language offered by both Republicans and Democrats, both senators and representatives during that process,” Murr said. “It demonstrates that all viewpoints have been and are being considered regardless of party affiliation in an effort to draft sound and thoughtful policy.”

House Republicans proved unwilling to move on all but one of the main tenets of the legislation.

They entertained some of the changes Democrats have been pushing for over the last few months to the portion of the bill that bolsters access for partisan poll watchers inside polling places, granting them “free movement” and heightening criminal penalties for election officials who interfere with their ability to observe elections.

On Thursday, they approved amendments offered by members of their own party to require training for poll watchers and to revise a portion of the bill that protected poll watchers from being removed from a polling place for violating the law or the election code unless they were previously warned their behavior was illegal. The final House bill now allows them to be removed without warning if they violate the state Penal Code.

Over several hours of debate, Murr kept intact other parts of the bill that clamp down on the state’s already restrictive voting-by-mail process by creating new ID requirements and making it a state jail felony for election officials to proactively distribute applications to request mail-in ballots, even to those who are eligible. The bill also still sets new rules — and possible criminal penalties — for those who assist voters, including those with disabilities, in casting their ballots.

Murr did allow for a series of Republican amendments, including increased penalties for election offenses. But Republicans faced their own failed efforts to further bulk up the bill, pulling down an amendment to require a forensic audit of the 2020 election in only the state’s biggest counties facing a Democratic challenge to its relevance to the bill.

Democrats also defeated a Republican effort to wall off federal and state elections. That could have allowed Texas to circumvent new, sweeping federal requirements for elections contained in the For the People Act currently under consideration in Congress.

Now that the House has given the bill final approval, it is up to the Senate to decide whether to accept the House’s version or request a panel of lawmakers from both chambers, known as a conference committee, to resolve the relatively few differences between the bills.

That’s the point in the legislative process at which the controversial version of the legislation that prompted Democrats’ first quorum break in May, Senate Bill 7, was reshaped behind closed doors so that it swelled far beyond the legislation the House had initially approved.

On Thursday, Democrats sought assurances from Murr that some of the last-minute additions would not return if the current bill was also finalized out of the public eye, namely new restrictions to Sunday early voting hours that were criticized for targeting the “souls to the polls” efforts focused on Black churchgoers and a provision that would’ve made it easier for judges to overturn elections — both of which Republicans tried to walk away from after Democrats stymied the legislation.

“I have no desire for those provisions to be contained in this document,” Murr said. “You asked how can we have assurance they won’t show up later, and I say one really strong way to do that is for us not to have a conference committee and we pass quality legislation off the House floor.”