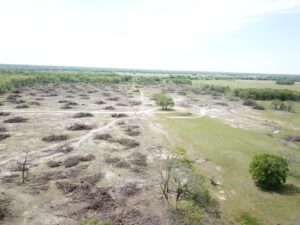 Members of the Dike community were recently featured in the online edition of the Washington Post regarding a fight to keep solar panels off their land.

Framed as “green versus green,” the article by Dallas contributor Mary Beth Gahan delved into an ecological conundrum: while the author (and others such as lawyers for Dike solar critic Michele Barnes) are pro-clean energy, they question the logging of the post-oak trees found in Dike to install the solar panels themselves.

In the article, Dike’s solar opponent’s raise several ecological concerns. The post-oak trees are not only residents’ cultural heritage, but also provide habitat for eagles and white-tailed deer, among other wildlife.

Chief among some residents’ concern is the post-oak’s ability to mitigate floodwaters. Community members argue that Dike is already prone to flooding without the trees removal, and fear that when solar companies come logging, the results could be catastrophic.

Arguments Gahan makes for the solar companies, however, include that Texas is in dire need of energy production after last year’s historic winter storm.

On June 29, 2021, Cynthia Martin, who leads a group called “Save Dike From Solar,” filed a lawsuit in the 62nd Judicial District Court against Hopkins Energy LLC and Hopkins County.

The suit alleges the court did not move properly to designate tax abatements for the proposed Dike solar farm and seeks for Martin to collect damages of $250,000 or more.